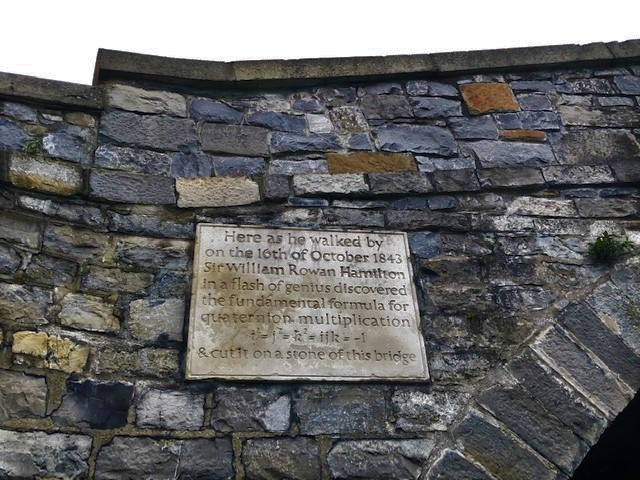 There are murmurings of a new Hamilton Way walking route in Dublin 15. A route of historical significance that would link Dunsink Observatory to the Royal Canal. Sounds great doesn’t it?

1,049 individuals have signed a petition (as of 12th May 2021) for Fingal and Dublin City Council to put this route in place. Apart from this however, there has not been a whole lot of noise about the project. We will discuss why later in the article. First let’s look at the details of this proposed walk.

Dunsink Observatory, built in 1785, originally formed part of Trinity College. Many of Ireland’s most eminent scientists have passed through its gates. One of them, William Rowan Hamilton is considered one of the greatest mathematicians in history.

Dunsink Observatory now forms part of the Dublin Institute for Advanced Studies (“DIAS”). The Observatory has been operated by DIAS since 1947. The Office of Public Works actually own the property. DIAS has a long term lease to operate from the location though.

William Hamilton was born in Dublin in 1805. Hamilton moved to live with his uncle at the age of 3 in Talbots Castle in Trim. Questions as to whether he supported Dublin or Meath remain unanswered. Hamilton’s uncle was a linguist and imparted his love of language to the young boy. By the age of seven, Hamilton is reputed to have knowledge of as many languages as he had years to his name.

Science won out over linguistics however and Hamilton entered Trinity College at the age of 18. He soon found fame in academia as a gifted mathematician. While still studying in Trinity, Hamilton became the Royal Astronomer in Ireland. Hamilton both lived and worked in Dunsink Observatory following this. In fact, he would spend the rest of his life living there.

Hamilton’s most famous discovery came on the banks of the Royal Canal on 16th October, 1843. Walking from the Observatory towards Dublin, he had a eureka moment in Broombridge. A flash of brilliance to solve a riddle that had been plaguing Hamilton for years. He came up with the following equation:

In order to document the moment, Hamilton scratched the equation into the stone on Broom Bridge.

So Hamilton is a big deal in mathematics. World renowned in fact. As a result, Maynooth University hosts an annual walk from the Observatory to Broombridge to commemorate the discovery.

The proposed route of the Hamilton Way is that of the annual Maynooth University walk.

Following Dunsinea Lane would then bring walkers past the entrance to Tolka Valley Park.

Onwards then into the village of Rathborne and to the Royal Canal. It is a mere 2.2k further along the canal to the eureka location in Broombridge. There already exists a plaque on the bridge to commemorate the discovery. Plus a commemorative artwork piece at the Broombridge Luas station. The artwork re-enacts the Hamilton with footsteps leading up to the Quaternion equation marked in the ground.

At first glance, the requirement for the proposed Hamilton Way to pass through land held in NAMA looks like a major obstacle. However, there exists a right of way, secured by Trinity College in 1910 from Dunsinea Lane to the Observatory. This seems like an obvious way to progress the Hamilton Way project.

Of course, one could argue that given Nama is a state body, they should be more than happy to help local initiatives such as this. Perhaps some political clout on the matter could help this along? Indeed, numerous local councillors, Senators and TDs have commented on the proposed Hamilton Way. Councillors such as Donna Cooney and Siobhan Shovlin, Senator Emer Currie and even former Taoiseach Leo Varadkar send off the odd tweet about the matter.

And well they should. The provision of a walking/cycling route from the Observatory to the Phoenix Park via Ashtown Station is noted in the 2014 Ashtown/Pelletstown Local Area Plan. In fact, the Local Area Plan describes it as a key transport infrastructure project for the area. The same plan notes this green infrastructure route a number of times. Seven years later though and it still hasn’t been delivered.

Why hasn’t the Hamilton Way been developed?

Here’s the tricky question, what’s stopping the Hamilton Way? It’s a historically significant subject and it’s got a nice story to it. It links up an underutilised resource to a wider audience. It’s even in the development plan for the area. What more is needed?

My own view is that the Observatory hasn’t done enough here to push the matter. They need to make locals more aware of this proposal. A lot of questions remain unanswered about it:

Most people (like me) don’t know the answers to these questions because they have never been to the Observatory. It would be great if the plan for the Hamilton Way clearly outlined what the Observatory has to offer the community. For example, maybe an interactive exhibition. Not only telling us the story of our own local man Hamilton but explaining the stars and the wonders of the cosmos. I think that would be pretty amazing. Not to mention really capture the imagination.

A Galaxy of Possibilities

Imagine if local people thought they could have this wonderful amenity at their doorstep. Then it would definitely be higher up their priority list when local politicians come to their door. This might get the same politicians to push the matter a bit more.

Wouldn’t it be lovely to have a Hamilton Day on 16th October every year. Like Arthur’s Day except about space and maths. Make it a local celebration. Get local schools, clubs and businesses from the area involved. Have a parade along the route.