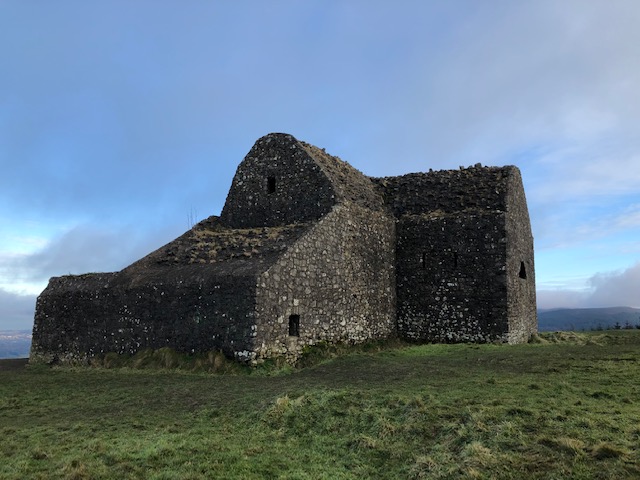 The Hellfire Club is one of Dublin’s favourite walking routes. This is with very good reason as it is a lovely hiking area offering super views over the city, the lush green surrounding countryside and out over Dublin Bay.

Getting to the Hellfire Club

There are four way marked walking routes here. All are accessible from the Hellfire Car Park. Be warned though, that due to the popularity of the area this car park is often full, with cars spilling out and parking on the double yellow lines on the R115 outside the car park. This can lead to the roadway only being able to accommodate one lane of moving traffic. As you would expect, this can cause congestion and delays along this patch of the road.

The car park itself is only 4.5km from exit 12 on the M50 so is easily reachable for city-dwellers.

On arrival, the 4 marked routes to choose from are:

A 5.5km looped walk around the edges of the forest which also takes in the Hellfire Club Lodge.

A slightly shorter walk than the Forest Loop which takes you up to the Hellfire Club Lodge, through the centre of the forest and then skirts back along the southern circumference of the wood and back to the car park.

Across the road from the Hellfire carpark is Massey’s Estate. This nature walk is 2.8km of forest pathways.

Also starting in the Massey Estate, this 4.2km trail follows the Owendoher River through the forest. Note that this is not a looped walk so you will need to walk there and back to get back to the car park.

We arrived at the Hellfire Club car park on a cold afternoon in late December. There was a large build-up of cars along the road in front of the car park. We decided to chance our luck and try the car park itself for a space. Hopeful that some of the early morning walkers would have left already and leaving valuable spaces available. Our parking angel looked after us and we got one of the last spaces available.

We had decided to do the Montpelier Hill walk initially. The route starts through a little stile near the entrance to the car park. Instead of joining the route straight away we actually set off through the gate at the far end of the car park. The advantage here is you are immediately rewarded with lovely views through the tress over the city. This wide pathway re-joins the Montpelier Hill trail after about 500m.  The start of the trail is a nice walk along a forest path. However, we knew that we could take this in on the return leg of the loop.

Fitness wise, the start of the walk is the most strenuous. You ascend about 70m during the first kilometre. It’s very doable though for anyone with a moderate level of fitness.

Above us was a mixture of blue sky and clouds and the slowly setting sun to the west was providing wonderful lighting to accentuate the beauty of the countryside around us.

The Climb to the Hellfire Club

Shortly after the 1km mark we left the well-maintained pathway and turned uphill on to a muddy track that led us towards the Hellfire Club Lodge. I regretted wearing runners for this walk. While they were fine, given the wetness and muckiness of the path in places, good hiking boots probably would have been a better option.

We quickly reached the summit and the site of the Hellfire Club Lodge. Built as a hunting lodge in 1725. Originally there was a passage grave in this location with a stone cairn marking the plot.  Supposedly in building the lodge on this site, the cairn was destroyed. With the stones then used in the building of the lodge itself.

When the roof of the building was blown off during a storm, the legends began of the location being haunted by the spirits of the occupants of the graves.

The lodge was later sold and became the meeting place of the Hellfire Club. This was a group of young “gentlemen” whose activities in the city had seen them expelled from their usual haunts. Thus, they decided on Montpelier Hill as the location to continue their bad behaviour. Possibly due to the rumours of the aggrieved spirits in the area. Further tales of occult activities and appearances of the Devil spread rapidly through the city and the legends around same are with us ever since.

Today, the building lies mainly in ruins. That said, it is still possible to enter into it and walk around the various rooms. The stories still draw interested hikers to the location. That coupled with the stunning views over the city make this a great walking route.

We dallied around the Hellfire Club lodge for a view minutes along with the various other walkers also taking in this lovely site. Then it was back to the trail.

We cut through the centre of the forest for about a kilometre, then swung a left and continued along the pathway for another kilometre or so.

Then the trail brought us to a point where we started to retrace our initial steps and back towards the car park. We took the forest trail this time and meandered back to the car.

The thing about walking in December is that it is COLD! We were lucky with the weather in that it was dry and calm. However, we still needed a blast of the car heater before setting out on the next stage of our journey.

After warming up and taking some water on board it was off again. This time to do the Nature Trail in Massey’s Estate. We exited the car park and turned left. After about 100m we crossed the road and entered Massey’s Estate.

Formerly the country residence of Baron Massey. The Masseys were evicted from the site in 1924 due to running into financial difficulties. The house itself fell to ruin and was demolished in 1941. The surrounding forest was planted with a variety of trees in the 1930s. It includes cedars, pines and giant sequoia to name but a few. There are plaques underneath many of the trees giving walkers information on what type of tree they are looking at. I find many of Ireland’s forest walks dominated by Sitka Spruce. As such, it was great to get a change from this.

The orange marked nature trail is about 2.8km in distance and includes highlights such as some lovely quaint stone bridges over the River Owendoher, ruins of an old saw mill and ice house and large sections of the stone wall outlining the boundary to the old walled gardens. These walls also have fantastic archways which the trail brings you through.

Underfoot, the trail was muddy and a little slippy in places. As such, be careful as you go. Overall though, it is a very pleasant easy going stroll through the woods.

We were getting cold again as we neared completion of the trail. The chimneys of houses in the distance were a reminder of how nice it would be to be sat in front of a roaring turf fire. The car heater would have to do us though as we made the short drive back to the city.

Overall, these are two trails I would highly recommend. Despite the cold, the weather was great for walking in. The Views are amazing. There is interesting historical buildings to see and wonder about. It’s not difficult fitness wise. All in all – a great afternoon walk!