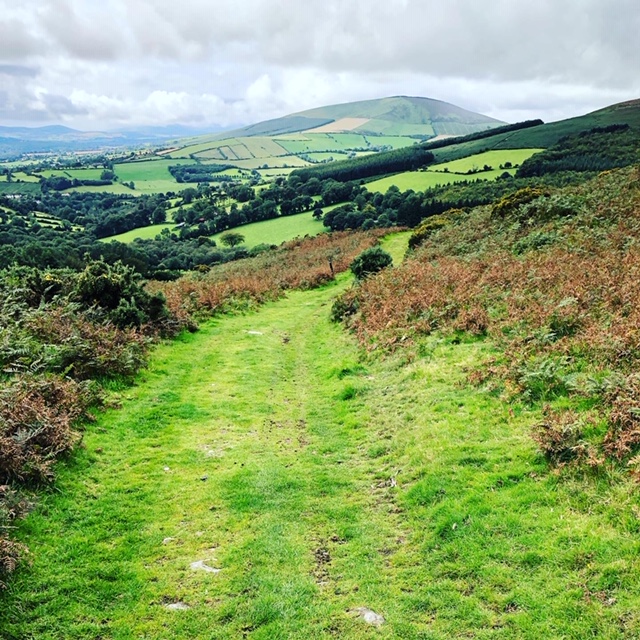 Details of Day 5 of my Wicklow Way walk from Moyne to Shillelagh.

The original plan for us was to stay the night in a B and B in Shillelagh. However because of Covid the owners decided to cancel bookings. As such, I never actually got to the village of Shillelagh as the Wicklow Way skirts around it. Instead we booked into Murphy’s Hotel in nearby Tinahely for Day 5 and my Wicklow Way walk from Moyne.

My wife had joined our club the previous night in Rath Bán Farmhouse and she was my companion for Day 5 of the Wicklow Way Walk from Moyne. We started the journey where we were picked up in Moyne the day before.

From my research for the Wicklow Way, days 5 and 6 had the least amount of information available. The general consensus online was that these days were the least enjoyable of the entire Wicklow Way. I think the rationale for this was that they lacked the mountain climbs and stunning scenery of previous legs. However, I thoroughly enjoyed these two days. There are still plenty of climbs (it wouldn’t be the Wicklow Way without them!) but the views are just different when you reach the top. It’s all about the rolling countryside and still very scenic. There are some long sections of forest on day 6 which I can understand can be a bit repetitive.

Leaving Moyne, there is a short roadwalk before moving to a grassy laneway and then back on to the roadway again for a short patch. We passed a few farmhouses with chickens leaving their yards to inspect us as we passed along. The sun was really starting to shine and it added to the lovely summer vibe to the walk. We continued along the country boreen for c. 2.5km with sounds of a nearby stream babbling away to our left.

After leaving the boreen we were on to our first real climb on the day up along a dirt track. It was quite mucky in places and I was glad of my sturdy walking boots. Soon we moved out to open fields. We stopped for a snack and water break at this point. A group of midges began too swarm around us so we quickly got moving again. We were not near the top of Ballycumber Hill but the views were still very impressive.

Onwards towards Coolafunshoge. We noticed the increase in the amounts of gates we had to go through. This was a big contrast to previous days. Regularly there were signs asking walkers to keep the gates closed after use and we duly obliged.

We reached the busy road from Hacketstown to Tinahely at 95km by crossing a bridge over the river Derry. Inquisitive Donkeys came to check us out as we stopped to take in the river views. We rewarded them with pets (though I think they would have preferred food).

Previously, walkers were required to follow the busy Hacketstown to Tinahely road for a section. Instead, we now climbed up a newly made staircase through the woods known as “Noel’s Way”. This is a steep climb but very prettily decorated with fairy doors and other cute paraphernalia along the way.

We had 11km done at this stage and decided to stop for lunch on a little wooden bench just after “Noel’s Way”.

We then turned left after a short walk on the narrow roadway. It’s then 1.5km along grassy pathways along the edges of fields. We had to be careful because it was very mucky in places.

Back on to country roads again and towards Mullinacuffe and closer to the 100km mark. We weren’t able to find any marker to denote this significant milestone which was a bit of a pity. However, popular opinion is that the crossroads where Tallon’s Pub (aka The Dying Cow) is situated is the exact 100km mark. We sat across from the pub and ate a banana. We daydreamed about the type of drink we would have had inside the pub if it wasn’t closed because of Covid. Mine was a Pint Bottle of Bulmers while my wife was torn between a pint of MiWadi or a cool glass of white wine.

We turned right at the crossroads and had a tough uphill climb along the narrow roadway. It was road walking for the next 6km until the busy R725 road to Shillelagh. We had arranged a pick-up point at St. Finian’s Church which is just before coming to the R725.

My Dad collected us and we drove to Murphy’s Hotel in Tinahely.

Elevation details for my Wicklow Way walk from Moyne to Shillelagh. We had some steep hill climbs but not as tough as previous days.