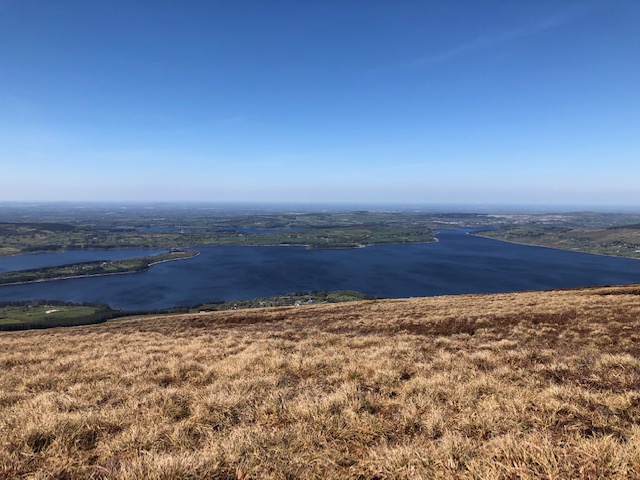 I recently wrote about walking stage one of the Wicklow Round. Silsean is the 8th peak on the Wicklow Round route. Having experienced some difficulties on the descent from this mountain I wanted to return and get an idea of how climbing Silsean should be done properly.

Silsean (or Soillsean as Gaeilge, meaning place of lights) is 698m and the 92nd highest peak in Ireland. The mountain looms over the Blessington Lakes in the west of County Wicklow. I climbed it from the Garryknock Woods side. Alternatively you can climb from the Ballyknockan side also. The Ballyknockan route would arguably be nicer as you would have the lovely views of Blessington Lakes on that side of the mountain.

When you know the correct route through Garryknock Woods, then 1.5 hrs should be sufficient time to get up and down.

The problem with climbing Silsean through Garryknock is that the forestry road that goes through doesn’t actually bring you to the upper perimeter of the woods. Rather, there is about 150m of forest that you still have to get through. This can be difficult as the woodland is quite overgrown and thick. So climbers need to know where the path is to make the quickest ascent. That’s what I’ll try to explain in this post.

The Start of Climbing Silsean

Here is the google maps link to the entrance point to Garryknock Woods. It’s a pleasant drive to get to this point. There are a couple of lay-bys on either side of the road to park. I was the only one parked there during my time on Silsean on a Saturday afternoon. As such, I don’t think it would ever get too busy.

I got out of the car and it was immediately a thrill for the senses. The first thing I noticed was the smell. Impossible to decipher exactly but it had hints of spruce and wildflowers. Just a general aroma of Spring and growth in the air. I could also hear a stream babbling away contentedly in the near distance. Finally the breeze was flowing through my haven’t-been-to-a-barbers-since-December hair. This is what it’s all about!!

So to start off, there is a gap to the side of the yellow and black barrier gate into the woods.

Already we are at quite a height and there are good views of the surrounding mountains.

After about 150m on the gravel forestry road, there is a bit of a clearing on your left hand side. This gives you a straight route uphill.

The alternative would be to follow the looped road around and an extra few hundred metres of walking. In any event I would recommend taking the grass route through the forest. The reason being when you intersect the road again after about 300m it’s a simple matter of crossing the road to keep following the path upwards. This is the most direct route up the mountain.

In saying that, while I flagged the more direct pathway, I actually turned left when I reached the road again. I (incorrectly) thought there might be another nice route upwards further along the road. I turned left along the roadway to investigate this further.

Ultimately I ended up following the roadway as far as it went. It turned from gravel underfoot to a mucky trackway.

I persevered until this muck filled trail also petered out. From there it was an even rougher trail directly upwards (to my right).

This too eventually also came to an end. I had made good progress through the forest though and it turned out it was only about 15 or 20m of bashing through thick forest to get up and out to the open countryside once again.

This was really heavy going and my firm recommendation is to go via the first pathway mentioned above. I ended up descending through this route so will be able to provide more detail further down. The only positive about the upward journey was a glimpse of a couple of deer flitting through the trees ahead of me at one point.

Out in the Open

After leaving the forest, the summit of Silsean is clearly in front of you.

So it’s just a matter of moving upwards and climbing Silsean. The ground underfoot is ok (generally burnt hardened gorse. I did come across some boggier bits in places so some caution is needed.

Climbing Silsean is rewarded by a nice looking beehived shaped cairn to mark the summit.

In addition, you have got some amazing views out over the Blessington Lakes. I recommend going down the slope on the lake side for a bit to truly get the best of these amazing views.

I sat down for a while and just took it all in. Bliss. After getting some water on board I decided to make my way back.

On the journey downhill, I kept close to the boundary fence that runs to your left the whole way down the mountain. Again I was lucky enough to spot a few deer running across the slope.

The fence runs to the edge of the forest. It’s passable when it comes to the juncture of Garryknock Woods. At this point it looks like you could continue downhill (keeping the wood to your right hand side) and descend directly to the roadside.

I was on the lookout for the pathway through the forest though. As such, I continued along the upper perimeter of the woods. After a few hundred metres the fence to my left takes a 90 degree turn to the left. There is an entrance gate here.

You can also see a stile. This should prove handy if the gate ever was closed. However the gate is sunk into what looks like at least a foot of mud. So it doesn’t look like it will be closing any time soon.

The mud at the gateway is a warning sign. The green pathway stretching out in front of you is extremely wet. You need to keep to the edges and be fleet of foot. It is passable though (just about).

Back in the Woods

Soon the pathway narrows significantly but it gives you sufficient room to manoeuvre around the trees and continue downhill.

Shortly you will reach the forestry road and it’s just a matter of crossing this road and continuing through the forest on the path that you took coming up the mountain earlier.

And quickly you’re back to the start again. Overall, it was a nice climb up Silsean with a lovely reward of views over the Blessington Lakes. I was lucky enough to get great weather so I didn’t mind spending the time having a wander through the forest exploring at the start. I also got to see a few deer. All in all, a nice day out.