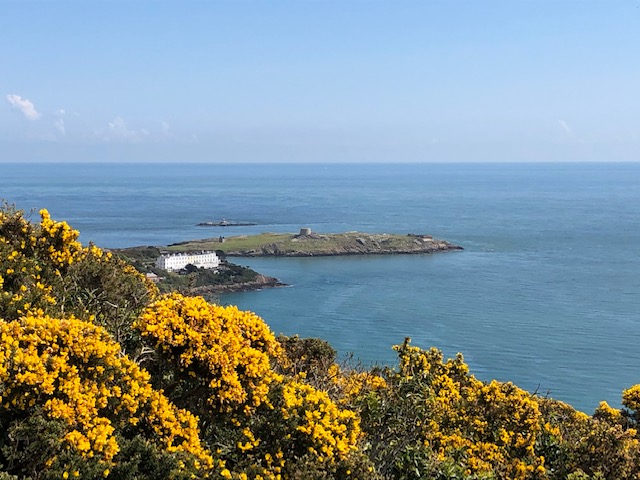 The Route for the Killiney Hill Walk

This post is about a route that not only takes in Killiney Hill but also Dalkey Hill. Plus a couple of fab beaches, an abandoned mine and a picturesque harbour. There’s also an old quarry. And three local parks. Not to mention an array of simply amazing houses along the way. All covered in a walk that is just under 10km. It’s no wonder that the Killiney Hill Walk (and surrounds) is one of the best walking spots in Dublin.

Despite all the amazing things about walking the Killiney Hill Walk there were a few concerns playing on my mind as I was planning the trip. The main one being where to park. I was aware that this picturesque part of the city gets extremely busy. Especially on weekends. I needed some local knowledge and decided to ask one of the guys from work. Aaron lives in the area and was able to provide me with some advice.

The main areas to park are beside the DART station or the car park in Killiney Hill Park itself. There are also some small areas of on street parking along Vico road at the entrance to Whiterock and a small car park at Killiney Beach. As per local advice, the general rule of thumb for any of these is that if you get there before 10am you should hopefully be ok. Any later and parking becomes either a bit of a wait or a lottery to find someone pulling out as you’re heading in.

With this advice in mind we arrived at quarter to 10 at the car park beside Killiney Dart station (obviously if you take the DART itself there are none of these parking worries). While the car park was full at this stage, there was a steady troop of early morning swimmers returning to their cars from the beach. There were only a few cars ahead of us. As such, we figured we wouldn’t have to wait too long. The others ahead of us weren’t so patient. A heated exchange over a disputed space kept us entertained for the 5 or so minutes we were actually waiting.

The entrance to Killiney Beach is at the opposite end of the car park that we drove in to. There is a tunnel under the railway line that gives access to the beach.

Blue skies and tranquil seas greeted us as we exited the tunnel. The majority of people on the beach were early morning swimmers. Plus a few dog walkers and others like us just ambling along, glad of the morning sunshine.  Otherwise everything was very quiet.

We turned left after reaching the beach. Dalkey island ahead of us in the distance. We stopped into Fred and Nancy’s Coffee van as we moved along the beach. After grabbing a couple of drinks, we sat on a nearby wall for a while. It was lovely to just be looking out over the beach. The weather was on our side and we knew that the next few hours were going to be enjoyable ones. There was just a general feeling of contentment as we sipped on our coffees.

Soon we were off again. We walked along from Killiney Beach on to Whiterock Beach. Be warned; when the tide is in, it cuts off the two beaches so be sure to check the tide times before you set off.

Whiterock is a slightly nicer beach than Killiney. The high cliffs act as a windbreaker and the area is a natural sun trap feeling much warmer than what we had earlier on our walk. We looked into the entrance to an 18th century lead mine which can still be seen from the beach.

We continued on our way up the steps at the back of the beach. These steps lead to a bridge over the railway line and onwards up to Vico Road. As we moved upwards the views out to Dublin Bay became even more magnificent. We could get a great view back over the way we had walked with Bray Head and the Sugarloaf in the distance.

We crossed Vico Road when we got to the top and into the entrance of Killiney Hill Park. It’s quite steep here for a while along a zig-zagged path.

When we got to the top of the steps we took a right. Alltrail.com has a nice map that sets out a looped walk around the park and this was the route that we followed.

Killiney Hill Park was given over to public use in 1887. It was originally called Victoria Hill after a member of the English Royal Family. Today known as Killiney Hill Park it is a very popular Dublin attraction.

The path was well maintained with the trees overhead providing shade. Every so often we came across a gap in the tree lines that provided lovely views out over the sea.

Following the path, there is a turn to the left when you come to a residential area at Torca Road. It’s a rough narrow path with wrought iron fencing on your right-hand-side.

The path twists and turns with the fencing soon replaced by stone walls. Each step brings a sense of anticipation as to what is going to be at the end of the path.

Suddenly we are out into the open again with stunning views out as far as Howth Head. The panorama also gives great views out over Dublin City.

Following the path the next clearing brings us up close and personal to the old quarry that forms the north side of Dalkey Hill. The stone from this quarry was used in the building of Dun Laoghaire harbour. The quarry is now used as a rock climbing venue. We are only yards away from a brave soul scaling the cliff face in front of us. Many more adrenaline junkies can be seen doing similar on the other sheer cliff-faces in the near distance.

The path soon leads us to the top of Dalkey Hill. We dawdled for a while and took in the wonderful 360 degree views (walking around the semaphore station at the top of the hill to get the full range of views).

Semaphore stations receive messages transmitted by the various Martello Towers dotted along the coast. We will get a closer view of the old Martello Tower on Dalkey Island later on in the walk. Peakvisor is a cool site that points out the various surrounding mountains from the summit of particular hills or mountains. It’s a good illustration of the places to be looking out for on a clear day.

Continuing the Loop on the Killiney Hill Walk

There is an option for a more direct route though the middle of the park to get to Killiney Hill. We opted to stick to the loop and stayed right at any forks in the path. This brought us down towards the car park (which was packed at this time by the way). Our route takes us through some mature forestry after the car park.

There is a coffee shop called the Tower Tea Rooms at the Victoria Hill entrance on Killiney Hill Road. We also see an interesting sculpture here titled “Thus Daedalus Flew”. It depicts Daedalus, father of Icarus. Daedalus, unlike his son, didn’t fly too close to the sun and is viewed as a symbol of  wisdom and knowledge.

There are also a couple of interesting monuments at the top of Killiney Hill. The first is Killiney Obelisk. Originally commissioned as a famine relief project (or folly) to provide work for the poor during a famine. Interestingly the work wasn’t done in the 1800’s during the Great Famine. Rather in 1742 during an earlier famine in Ireland. Which really is just another piece of proof of the terrible harshness our ancestors had to endure.

Another folly (this time from the Great Famine period) is the nearby Dublin Pyramid. A seemingly magical place, legend has it that if you circle each level of the structure while climbing to the topmost point, then make a wish while looking out to St. Begnet’s Church on Dalkey Island, then your wish will come true. All I know is that the views from the top definitely are magical.

It was nice to be going downhill again after Killiney Hill. We soon were back to our starting point on our loop of Killiney Hill Park. We actually repeated our steps for a small section and came out at Torca Road again. This time turning right and descending the “Cat’s Ladder” steps to reach Vico Road once more.

We turned left at Vico Road. This stage of the walk I like to call “House Envy”. The homes here are amazing. It must be great to constantly have those lovely sea views. We turned right when we arrived at Coliemore Road. Crossing the road we entered into the very pretty Sorrento Park.

After Sorrento Park, we crossed Coliemore Road again and into Dillon’s Park for views of Dalkey Island. Dalkey Island is very interesting in itself. The ruins of St. Begnet’s Church dates back to the 7th century. The island was used as a viking slave market around the 10th century. The visible ruins of the Martello Tower are from the 19th century. Now the island is home only to feral goats and rabbits.

You can visit the island however it is not possible to swim over. Despite the short distance, the very strong currents make swimming impossible. We saw a few kayakers, stand up paddle boarders and boat trippers dock on the island while we gazed over.

We walked as far as Coliemore Harbour before circling back via Green Road to the way we came. Then back along Vico Road for about 2km towards Killiney. The tide was in at this stage so it would have been impossible to retrace our route along Whiterock.

We stayed left, continuing along Vico Road when we came to a fork on the road (right would have taken us on to Victoria Road). Here again, the wealth of the local inhabitants was very much evident. What we could see of the houses and gardens were very impressive.

We stayed left again at the next juncture we met. We could have continued along this road back to the car park. The alternative is to take a little laneway going steeply downhill to bring you back out to Killiney Beach. We chose the latter to have another brief stroll along the beach before getting back to the car.

Our walk in total was roughly 9.5km. We spent 3.5 hours on this Killiney Hill walk and enjoyed every minute of it!