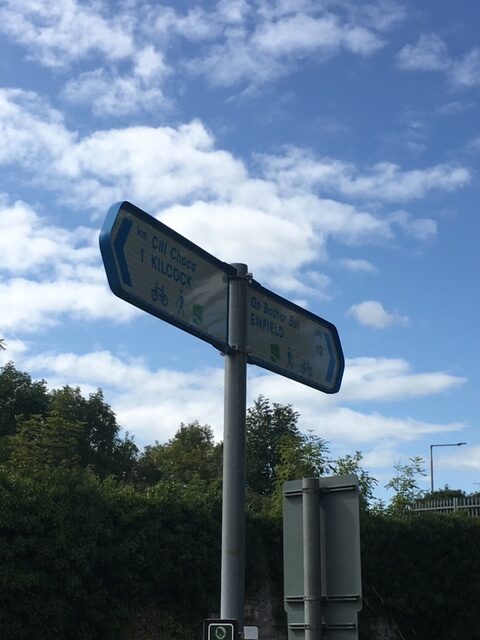 Following my first stage I had a nice lazy morning and a big breakfast in Carton House before setting out on Day 2 of walking the Royal Canal Way at around noon. I took some extra fruit, pastries and some meats and cheeses from the breakfast buffet to do me for lunch on the walk. It was 2km back out the avenue again to get back on to the Canal route.

Back to Walking the Royal Canal

It’s a short 2.5km along well maintained paths to get to Maynooth. The harbour area in Maynooth is very well maintained and was busy with school children enjoying their lunch break as I passed through. The water itself was busy too. This time with ducks and swans.

The canal path then continues past Maynooth University perimeter walls. Then I passed along and under Jackson’s Bridge. This is a 5 arched bridge with arches over the canal, railway line, two arches for a cattle path on the south side and an arch for walkers on the north side. 1.7km later is Bailey’s bridge. Not nearly as attractive looking as Jackson’s Bridge. This is what’s known as an accommodation bridge and was built specifically to allow the landowner access to both sides of the canal.

Similarly to Day one, I had lunch overlooking some pretty barges moored just after Chamber’s Bridge. From there it was a short walk into Kilcock. Part of this walk is parallel to a busy roadway which is not the most pleasing on the eye. Kilcock harbour makes up for this however as it is very picturesque and well maintained.

Pint of Plain in Kilcock

I stopped into Thomas O’Keeffe’s pub in Kilcock for a pint of Guinness. The pub was quiet with a couple of tables of people having late lunches. I sat at the bar and enjoyed my drink.

Soon I was back to my walk and crossing over the public road at Shaw’s bridge. The path continues along the North side of the canal. As I leave Kilcock I can see markings for the weekly 5km park run. Like Mullingar, they use the canal path for the park run here. These routes would be a good place for anyone looking for a park run personal best as they are nice and flat!

The Run distance markers proved useful to me to track my progress as I continued along my way.

About 4km past Kilcock I arrived at Mcloughlin’s Bridge and the 17th Lock. This marks the start of the long level which is a 32km stretch of the Royal Canal without any Locks. Here is where it got tricky for me. I needed to cross to the south side of the canal to continue the journey. However it was clear when I was walking that construction was underway to put a tarmacadamed surface along the north side of the canal. This is opened now so walking along the north side is recommended.

When the Going Gets Tough

On the south side, it’s just a grass track for nearly 6km. In some places there wasn’t even a track. The grass was long and my feet were getting tangled in the grass. Plus, I had already walked 14km. So I found this tough going. The fact that I could see a perfectly smooth tarmacked path just on the other side of the canal added insult to injury. Finally, it started to rain quite heavily along this stretch. At least I had good weather proof gear on!

After Cloncurry bridge, I crossed back to the north side of the canal. I was back to smooth surfaces. Would you believe the sun even started to shine. The first kilometre after Cloncurry bridge is actually along a public road. This is one of the few stretches of the Royal Canal way that is along the road. Luckily, it’s a quiet country road and I didn’t see too many cars.

Once off the road I enjoyed the next 2km walk into Enfield. My accommodation for the night was Johnstown House which is a 2km walk from Enfield Bridge. I actually made a mistake here and thought I would be able to access the R148 just after the Enfield Harbour. This bridge doesn’t have pedestrian access though so I needed to retrace my steps back to Enfield Bridge.

Once back on the right track I was able to get to Johnstone House without any further mishap. My wife again met me that evening. We enjoyed the lovely pool facilities in the hotel before a nice meal and couple of drinks in the bar. I spent the evening regaling her with the details of the 26km of Day 2 walking the Royal Canal. Overall it took me 5 hours and 40 minutes to get this stage boxed off (including a stop off for a pint of Guinness in Kilcock).