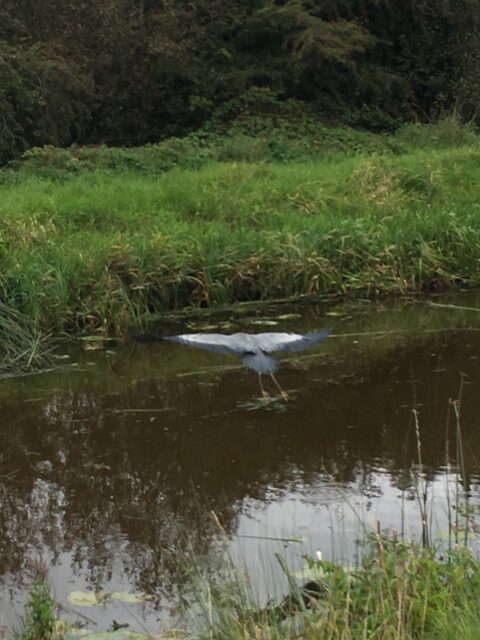 After making good progress on Day 2, another big breakfast set me up for Day 3 of walking the Royal Canal. I again took a few extra supplies from the breakfast buffet to act as my lunch. Today would be the first night that I didn’t have a family member to help me with so I had to pack a few extra bits in my day bag. I left Johnstown House shortly after 10a.m. Day 3 of my Royal Canal Way had begun.

Before I got back to the canal line, I passed a nice little memorial garden dedicated to the memory of the 1916 rising.

I stopped in a little Italian restaurant in Enfield Village called Cesare’s for a coffee before returning to the canal and to Enfield Bridge.

Back to the Canal

I continued on my journey. This time on the south side of the canal. With the canal on my right, I admired this fine stretch of the canal as I walked out of Enfield and passed Enfield Harbour and a nice park on the opposite side of the water.

Day 3 of walking the Royal Canal is one of the nicest days of walking. It was also one of the quietest as I met very few other people along the canal route. Soon I was out into the countryside. Nearly 4 kilometres out of Enfield, I come to the aqueduct over the Blackwater river.

Then it’s another 800m on to Kilmore Bridge and a familiar sign “Canal Bank Closed”. Again, there is renovation work on one side of the track. This time it’s the south side that is getting a new tarmacadamed pathway laid down.

At this point, I met a lovely couple out on bicycles. They told me they were cycling the Royal Canal Way. As a result of the above mentioned path closure, the cyclists were going to go on a brief detour by road and rejoining the canal at Furey’s pub in Moyvalley. Luckily for me, the north side of the canal was still open. This side of the canal was an overgrown grass path and difficult to navigate in places with bushes and trees jutting across the pathway. However, it was only 1.5km until I got to Moyvalley Bridge so I was in good spirits as I tramped along the track.

It was about 12.15 when I arrived at Furey’s pub in Moyvalley. I sat up at the small bar and ordered myself a pint of Guinness. There was one other older gentleman sitting at the bar and the two of us chatted away to the barman while we supped on our pints. The older man had visited this area a lot in his youth and recounted some of his memories to us. It was a grand way to pass away a Thursday afternoon. The food is reported to be very good in Furey’s if you wanted to make this your lunch stop for the day. I didn’t try it though and headed on my way again after I finished the lovely pint of Guinness.

I stayed walking on the north side of the canal after Fureys and I soon came across the Ribbontail bridge (2km after Moyvalley Bridge). This is a bit surreal as the bridge is completely in the middle of nowhere and for all intents and purposes seems to be no reason for this bridge to exist whatsoever. Some research into this shows however that the bridge was historically used to allow mass goers to cross the canal and get to the church in Longwood. Which is a bit mad really. I have heard that there are plans to resurface and re-open the walking path to Longwood which would be really nice.

The next point of interest is 2km later at the Ribbontail paddlers club. They have done a lovely job refurbishing the old house on the banks of the canal. There is also a viaduct over the R160 and shortly afterwards an aqueduct over the River Boyne. My view is that this is the most impressive aqueduct on the Royal Canal. The width of the river Boyne below you makes this an impressive view.

Just after crossing over the River Boyne. I met a lovely Heron and he kept me company for a little while.

After another 5km of nice countryside walking I arrived at Hill of Down. St. Columba, St. Brigid and St. Patrick are all buried on the Hill of Down according to legend. I saw no sign of them. I crossed the Killyon bridge and traversed back on the other side of the canal which has a shop, post office and pub all under one roof. It’s after 3pm and the pub seems closed. This isn’t too strange for country pubs as their day time trade wouldn’t generate enough money to make sense to keep it open. I decided to go into the shop/post office and enquire. The owner confirmed the pub is closed but generously offers to open it up for me if I wanted. Sure why not!

I went back outside and the bar door duly opened. I’m conscious that I’m the first customer of the day and so I’m unsure about the beer situation. If it has been sitting in the taps all night it might not taste the best. As such, I opt for a pint bottle of Bulmers Cider. I’ve walked about 18km at this stage and it’s lovely and refreshing to have a nice drink.

It’s 6km then from Ballasport bridge to Darcy’s bridge and where I leave the canal for the day. These are kilometres 20 to 26 for me today and I can feel my legs starting to tire as I move along the pathway. One good thing about this stretch is that we leave Meath and enter the best County in Ireland, Westmeath. There was no physical indication of this as I was walking so I was keeping a close eye on google maps so I would be aware of the joyous occasion. Luckily, mobile coverage here is good (as it is for the majority of the walk in).

The last 1.5km before Darcy’s bridge is one of the nicest stretches along the Royal Canal. The old Estate House of Hyde Park is over the fields to our right and there are lovely mature trees marking the perimeter of this demesne and the canal.

I turn left at Darcy’s Bridge leaving the canal and heading towards the town of Kinnegad and my lodgings for the night. The first 2km are along a nice quiet country road. I then turn left again and on to the busy Killucan-Kinnegad road. There are a lot of cars and no footpath until I reach the outskirts of Kinnegad. To be 100% honest, if I was doing this route again, I don’t think I would stay in Kinnegad. It’s about 5km away  from the canal (which was a lot when I had already walked 25 plus kilometres that day) and this road is a bit uncomfortable. Instead, it would have been better to stay in a B and B in Killucan. Despite this, Harry’s in Kinnegad was very nice and I had a nice stay in the town.

Day 3 of walking the Royal Canal was nearly 31km. I was wrecked after it.