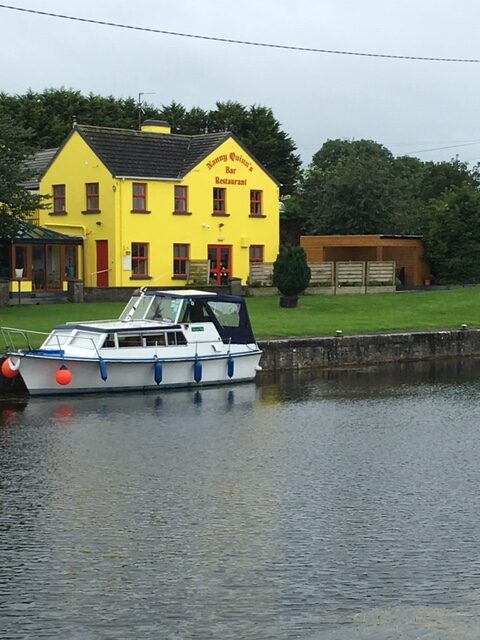 I picked up some lunch provisions in the EuroSpar deli in Kinnegad before the start of Day 4 of walking the Royal Canal Way. Like the previous day, I have to walk along the busy Killucan-Kinnegad road. I moved quickly and tried to get this part over and done with as quickly as possible. Luckily, I had plenty of energy after a hearty breakfast in Harry’s Hotel so was able to power through this section in short order. I relaxed a bit after I turn right and on to a quieter country road as I journey back to Darcy’s Bridge. The only thing I worry about now is the rain with some really dark clouds overhead.

Back to the Canal

I reached Darcy’s bridge and crossed to the north side of the canal. From here I journeyed on to the next 1.3km stretch. This brings me to Thomastown Harbour, Bridge and the 18th Lock. This is first lock I have seen since before Enfield 32km ago.

The rain had just started as I ducked into Nanny Quinn’s pub on the south side of the canal at around 12.30. I sat at the bar and looked out at the heavy rain falling outside. The barwoman was very friendly and interested in my walk so far. She advised that they were used to walkers calling in but not many walk the whole way from Dublin! She looked a bit concerned when I started to leave with the rain still falling outside but I assured her that my sturdy rain gear would keep me dry.

Luckily the rain didn’t keep falling for too much longer as I continued along the south side of the canal after Nanny Quinns. For this section (about 2km) or so, I walked along a roadway open to traffic. So I did need to be a little careful here. It’s very quiet though and I don’t think I met any cars as I walked along. The roadway ends at the 22nd Lock and Riverstown Bridge. As I approached the bridge, I saw a big sign for Cunningham’s Pub (aka The Hideout) so I decided to check it out.

I took a left at Riverstown bridge and it was a short stroll to the pub. Like the Hill of Down previously, there is also a shop here as well. I went in the door on the left hand side of the building and into a deserted pub. I continued around the corner and got a bit of a shock. The place was packed!! It was 2pm on a Friday afternoon and there were about 15 people sitting in the bar. The Hideout was a very apt name for this place it seems!

All of the locals were full of curiosity about me and I stayed for a nice pint of Guinness and gave them an outline of my adventures so far. They wished me well as I left them. This time out through the shop.

I’m back on the North side of the Canal after Riverstown Bridge. Just over a kilometre later and I’m at the 25th Lock which marks the start of the Summit Level. This is the point between the locks at the highest point of the canal. It’s actually a full 25km before we meet the next lock and a full 100m higher at this point than the river Liffey in Dublin.. I could see the next bridge up ahead though (Footy’s Bridge) and I continued along the now grass path and underneath this bridge.

After the bridge, I shared the route with traffic (for 1.5km). I found the road to be very quiet though so no big issue. I passed another Heron out doing some afternoon fishing before I arrive at my next pub of the day. Mary Lynch’s in Coralstown.

The pub is just under the canal flows under the busy M4 motorway. I went up over McNead’s bridge and into the bar. I drank two pints here. The only pub along the Royal Canal Way where I had more than one pint. The reason being, I met an Australian couple in the pub. I struck up a really interesting conversation with them and the Kerry Barman who owned the premises.

The Australian man was a former professional Australian Rules footballer and we were informing the couple about the upcoming All Ireland final between Kerry and Dublin. I actually had a ticket for the match the following Sunday which greatly annoyed the Kerryman behind the Bar.

After two pints, I left Mary Lynch’s and continued along the south side of the canal. I saw my new friend the Heron again as he continued his search for dinner. This section of the canal is actually designed as a blueway (trail navigable by water) and I saw a couple of people in canoes between here and Mullingar.

The Down’s Bridge marks the 77km mark from the River Liffey. It’s also one of my least favourite sections of Day 4 walking the Royal Canal Way. The reason being the canal runs parallel to the busy (and loud) M4 motorway. Luckily, it was only for about a kilometre and then the canal turned away from the motorway again.

As I approached Mullingar the route became busier with a lot more walkers, joggers and cyclists out and about.

After Baltrasna Bridge, there is a canal cutting (or sinking). A cutting/sinking is where a canal is cut through the land to maintain the same level rather than use locks to get over it. This results in the pathway being quite high overlooking the water of the canal below.

As I approached Mullingar, there were a couple of points of interest. The first being the little monument at Piper’s Boreen. So called because it’s the location where the piper used to play to announce to the people of Mullingar that a barge load of goods had arrived into the town. There were no pipers to greet me yet (although I did get a bit of a fanfare shortly afterwards!).

The other nice things on the way into Mullingar are the nice views of the Cathedral in the distance (tallest building in Westmeath) and being able to peek over the wall and into Cusack Park GAA pitch. The latter bring back happy days of playing there in my youth.

Reception Committee after Day 4 of Walking the Royal Canal Way

I finally arrived at my target destination for the day at around 6pm. I can see my niece and nephew, brother, sister and parents at Mullingar Harbour. It’s an amazing welcoming committee. I’ve been walking towards my family for the last 4 days so it’s so great to see them all!

It’s taken nearly 103km of walking but it’s beginning to feel like I’m nearly home. I’ve done 25.5 of those kilometres today on day 4 of walking the Royal Canal Way. This included a ridiculous (but enjoyable) 4 pints along the way!

Next stop is my sister’s house who has kindly agreed to put me up for the night.