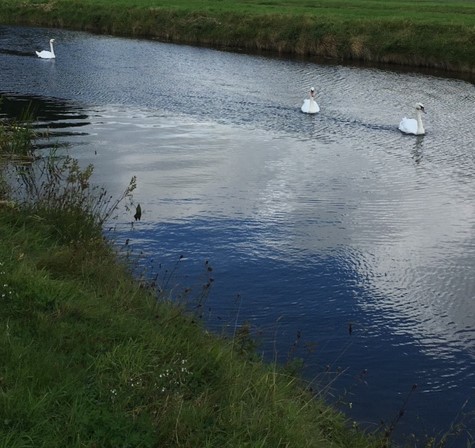 After a good evening out in Mullingar the night before involving a nice dinner out in the town, I was ready and raring to go on Day 5 of walking the royal canal. This was my fifth and final day walking. I had a nice breakfast with my sister and thanked her for generously putting me up for the night.

Back to the Tow Path

Then I was off again, setting out from the Harbour in Mullingar. Day 4 of my Royal Canal walk had seen me cross the threshold into County Westmeath. Now I was really in the heart of the lake county. Indeed I was actually in the heart of Ireland. The canal runs very close to the Hill of Laragh in the parish of Milltown. The other peak in this parish is the Hill of Uisneach. Uisneach is the exact centre of Ireland. Uisneach is an ancient ceremonial site and a place of great importance in Irish mythology. The sacred centre of Ireland being celebrated through the festival of Bealtaine (Gaelic May Day).

Mullingar Harbour is split in two by Scanlon’s Bridge. I went under this bridge and came out to the other side of the Harbour. This section of the canal is very well maintained with a nice park on the opposite side of the water. I really liked the quaint little revolving gateway that leads to Mullingar Cathedral along the Mass Path. I didn’t take this pathway but continued along the canal. Despite this, the Cathedral soon loomed large in front of me.

The Edge of Town

The waterway continues to snake through the town of Mullingar on Day 5 of walking the Royal Canal. I passed under the railway bridge, a pedestrian bridge and the Green Bridge. Beyond the Green Bridge is Mullingar Railway Station. As I continued along, I started to leave the town. After Grange Bridge is the start of the Mullingar Park Run. I’ve done the run here a few times. It’s a really great location for a PB as it’s completely flat. The Park Run course goes along the canal line for 2.5km before coming back towards the town along the Old Rail Trail. This is a 40km greenway that runs between Mullingar and Athlone. This section of the Royal Canal way also forms part of the Westmeath Way – a 33km walking route between Kilbeggan and Mullingar.

The next harbour I came across was in Ballinea.

I walked 6km to reach this point. There is a nice picnic area here but I continued on without stopping. Ballinea was the last village I passed through until I reached Ballynacargy 12.5km later on Day 5 of walking the Royal Canal.

As expected, this long stretch between two small villages is very rural. I was lucky enough to get blue skies for the part of my walk and I really enjoyed the splendid isolation.

The highlight of this section was most definitely the beautiful Coolnahay Harbour. The harbour is extremely well maintained and the lockkeepers cottage is wonderfully restored.

I’ve walked 11km by the time I stop for lunch at the 28th lock just past Coolnahay. I picked up a sandwich in Mullingar earlier in the morning and ate this while sitting on the lock gates.

Coolnahay also marks the end of the summit level and as such it’s all downhill from here. It’s still very remote however despite this, the underfoot conditions are very good. For all of today’s walking there is a nice smooth surface beneath me.

I enjoyed the remainder of my scenic walk through the countryside as I headed towards Ballynacargy.

Ballynacaragy is a medium sized village with 4 pubs and 3 shops and so makes it a good place to stop for supplies. Or if you’re like me, a good place to stop for a pint. I turned right over Ballynacargy bridge and into the village. I went into the Wagon Wheel for a pint of Guinness. Being very close to home now I knew most of the locals sitting at the bar watching the Saturday afternoon sport on the television.

There are four pubs in the village but the one I would visit most often is the Wagon Wheel. Part of the reason for this is the top quality Guinness they have to offer. I had walked nearly 19km at this point and it was as good as I expected.

My wife had kindly offered to walk with me for the last 8km from Ballynacargy. We left the Wagon Wheel and headed back towards the canal. Unfortunately it was a tough start. It started to lash rain as soon as we got to the waterway. Luckily it didn’t last too long and the sun was shining again shortly afterwards. We walked 3k along the canal as far as Kelly’s Bridge in scenic Emper. This marked the end of my journey following the canal. It had been my companion for 101km over the last 5 days. Now though, it was time to turn towards home and complete the last 5km along pleasant country roads.

My surroundings were very familiar now as I passed by the homes of friends and neighbours. We completed the final leg of my journey in great spirits. Our humour improved even more as we reached our final destination. My family had gathered together a great welcoming committee for us. It was great to be home!

The Important Things in Life

One of the great things about solo walking is the opportunity it gives you to be alone with your thoughts. These last five days had given me plenty of time for contemplation of my journey. It was a 129km walk from my home in Dublin to my childhood home in Westmeath. It had started off as a way to say farewell to my life in Westmeath. I realised that it was more than that.

It was a tribute to my childhood and adolescence. The person I am was forged in Westmeath. It’s where I am from. It will always be a part of me and very important to me. Finally, this journey was evidence of the importance of family. This was clear to see as I sat down to a finishing-line meal with my wife, parents, siblings and niece and nephew. The Royal Canal Way had been a memorable journey and this fitting finale would be a memory I would cherish.