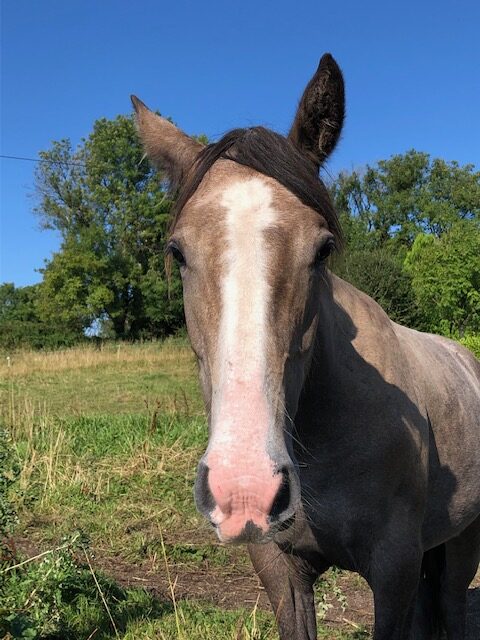 It’s nearly 18km to walk from Carran to Corofin via the Burren Way. I’ve uploaded a map to alltrails.com which outlines the route. My accommodation in both locations (Magoughey House B&B in Carran and Corofin Country House in Corofin) lay a bit further out from each village. As such, I had about 19.5km of walking in front of me. So a much shorter walk than the preceding days. Another positive was that the weather was fabulous. From the outset I was able to enjoy lovely blue skies and glorious sunshine. This was to continue for the rest of the day.

The only negative of day four of walking the Burren Way is that the entirety of the day’s trail is made up completely of road-walking. In the most part, it is along quiet country roads and laneways but I never feel fully out in nature when walking on roads. Despite this, the views were very scenic throughout the whole day and it was an enjoyable walk.

I made my way back towards the village of Carran and to re-join the Burren Way. I passed Cassidy’s pub in village. The building was completely deserted at this hour of the morning. It looked like a nice place though to enjoy the views of the surrounding Burren while stopping for a drink or a bite to eat. Just past the pub, there is an interesting plaque commemorating Carran as the birthplace of Michael Cusack, founder of the GAA. There is actually a museum in Carran about their most famous son – the Michael Cusack Centre – if you wanted to pop in for more information about Cusack.

I took a right turn in the village and soon am walking past the NUIG Carron Research Centre. The natural biodiversity of the Burren means it’s little surprise that the Galway University has a research station in the area. The wide expanse of the nearby limestone pavements likely offering wonderful study opportunities.

Shortly past the Research Centre, I stayed right at a fork in the road. Just under 2km from the village of Carran, there is a sharp turn to the right. This is followed by a long straight stretch of road before a turn to the left at just past the 3km mark.

Archaeology of the Burren

One of the things the Burren is famous for is it’s rich history of archaeology. There is evidence of human activity in the area from as early as 12,500 years ago. Interestingly, this evidence was a bone of a butchered brown bear showing that the animal had been killed by humans around 10500 BC. It was slightly more recently that humans started making a more visible mark on the landscape. The Burren is home to an abundance of megalithic tombs from Ireland’s ancient history (dating from 4,000 BC) as well dwellings such a ring forts from the middle ages.

Day four of walking the Burren Way passes many such examples of these historic structures. At around the 5.5km mark, I passed close to the Cahercommaun – a 9th century triple stone ringfort. There was a path to my left which leads up to the fort. Again another good option if you had the time available to get side-tracked.

Shortly afterwards I also passed very close to wedge tombs at Creevagh (6km mark) and Parknabinnia (8km). Parknabinnia is right on the roadside and easy to stop in for a closer look via a stile over the wall. Before Parknabinnia, the route opens up and the road is through a wide expanse of land. This gives a good opportunity for nice views over the valley.

The ultimate aim for day four of walking the Burren Way is to loop around Inchiquin Lough and on to my final destination of Corofin. The lake becomes visible shimmering in the distance after about 9kms.

Indeed, I was at good height at this point and the views were lovely in general.

I continued along the various roadways and thankfully, the Burren Way continued to be well signposted as I moved along the trail. I crossed the busy R476 at about the 10.5km mark and then over the pretty River Fergus at 11km.

I reached the lake after 13kms of walking. As I enjoyed the views of the glistening water, a woman passed me by on horseback followed by her lovely german shepherd dog. I waved hello to them as they trotted by. It was just passed mid-day and I envied her gentile mode of transport on this fine sunny day.

The road skirted around the perimeter of the lake through a woodland area. While the dappled sunlight was very nice, it does mean that there are only occasional glimpses of the water from here onwards.

I stopped for my lunch when I reached Clifden Waterfall (a modest waterfall flowing down from Clifden hill towards the lake). As I was eating, I again encountered the horse rider and german shepherd as they made their return trip. This time the dog was a bit more inquisitive and came over to say hello. I chatted to the horse riding lady for a few minutes before they moved along again.

A few minutes later I followed after them. I again crossed the River Fergus as I walked the last few kilometres into Corofin.

I reached Corofin just before 3pm. This gave me ample time to explore the village. I enjoyed a fine meal at the newly refurbished Yellow Submarine Bar. Given day four of walking the Burren Way was the culmination of my Burren Way adventure, I also called into another couple of pubs in Corofin to toast my achievement. The staff and locals of both O’Riain’s Bar and Hogan’s Bar were very friendly and welcoming.

As I enjoyed my few pints, I couldn’t help but think back over the past four days of the Burren Way. Overall, the Burren Way provided me with four great days of walking. The scenery is beautiful and I really lucked out with the weather. The last day and a half consisted entirely of road walking which does detract somewhat from the route. The Cliffs of Moher coastal walk on day one is spectacular. Definitely, the most impressive walk I have ever done. That was the highlight of the Burren Way for me and an experience that I will never forget.