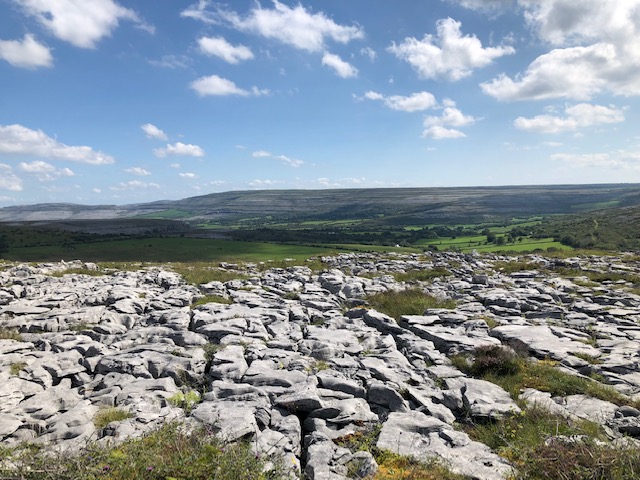 Always be prepared. That’s what they say. And I should have listened. My planning skills really let me down on day three of walking the Burren Way.

I knew I had to retrace my steps and get from Ballyvaughan back to the main Burren Way. That is 6km. I incorrectly thought that the subsequent walk over the mountain and on to the village of Carran was around 14km. The error was completely my own as I I selected the wrong junction when mapping out the route in preparation for day three of walking the Burren Way.

As sometimes happens, once one thing goes wrong it can lead to a domino effect. I took a couple of wrong turns along the way which added a few kilometres to my journey. Plus, I hadn’t accounted for the extra 1km walk from the village of Carran to my B&B. So all in all, what I thought would be a 20km walk turned out to be nearly 29km.

I’ve uploaded the correct maps to alltrails.com. These include the 6km Ballyvaughan Spur and the next stage of 18km to Carran. Hopefully these can be useful and others can learn from my mistakes!

I stayed in Ballyvaughan at the end of August 2021. My accommodation for the night was in the lovely Wild Atlantic Lodge Hotel. The stay here came after completing 28km on day one of the Burren Way and 27km on day two of the Burren Way. Having reached the halfway point of the Burren Way and (again incorrectly) thinking that day three of walking the Burren Way only encompassed c. 20km of walking, I decided that I could afford to have a few pints more than usual in Ballyvaughan. The sun was shining and I sat outside reading my book, enjoying the fine pints of Guinness on offer and chatting away to the friendly locals. All in all, it was a lovely evening.

As such, I felt a little bit groggy waking up on Day three of walking the Burren Way. No harm though, I only had 20kms to walk! A hearty full Irish breakfast put me to rights quickly enough and I set off on my journey just after half 10 on a lovely sunny morning.

Starting Off on Day Three of Walking the Burren Way

So off I went, retracing my steps from the day before to get from Ballyvaughan back to the main Burren Way route. I again past through the limestone pavement walk and into the forest walk.

Sometimes in Ireland, you get these beautiful August days of wonderful sunshine, and this was one of them. The temperature seemed to rise with every step I took. The Wild Atlantic Lodge had filled up my water bottles before I left. I had two litres of water and I was drinking generously as I walked. The combination of the pints the night before, the salty breakfast and the lovely sunshine making me thirsty. I thought I only had 20kms to do today so I wasn’t too worried.

The next section of day three of walking the Burren Way was road walking. A large portion of this moved parallel to the Rathborney River as I travelled along my route. I enjoyed the sounds of the babbling stream and the dappled sunshine caused by the overhanging trees over the water as I moved along.

Soon I returned to the turn off to the left that would bring me to the next section of the Burren Way. This marked 6km of walking on this fine sunny day.

I turned left onto a little boreen.

Soon I was moving uphill for the first time that day.

At the 6.5km mark, there is a turn that is not well signposted. The boreen that I had been following had two options here. The Burren Way route is to the right through ungated stone pillars

The next 3.5km of day three of walking the Burren Way were probably the nicest section of the day’s walk. I moved steadily uphill and the views steadily improved as I moved along. The only soul that I met along here was a farmer out checking on his sheep. The feeling of isolation, the lovely blue skies and the wondrous views made the mountain walk really enjoyable.

My next mistake of the day came at the mountain bog as I reached the peak of the day’s ascent. The Midlander in me came out, as I marched away from the bog road to inspect the turf on offer. Satisfied that I could report to my Father that the turf was not as good as what we have at home in Westmeath (I have ode to Westmeath turf in a sperate post), I continued along the bog track thinking this was the the way to go.

I walked about 500m before realising my mistake and returning to the actual bog road that was the Burren Way route.

I continued along the bog road for about a kilometre. Then it was a left turn along a forestry road. For another 1.5km and on until I reached a main road that was the N67. This was a quite busy road that I had to follow for a couple of hundred metres.

Then it was a turn to the right and approximately 2.5km along quiet country roads. It was about this time I realised my mistake and that I had a further 5km than originally thought on my journey.

I took a break and visited the stone fort of Cathair MicNeachtain (built between 500 and 1700 AD).

Shortly thereafter, I took another wrong turn. I had just realised my mistake about how far Carran actually was and at a junction about 1km past the fort I turned right rather than left. Another mistake. I soon corrected my error and was back along the correct route.

When I got back on track I realised I was now actually 9km from the village of Carran. Disaster. At this stage, I had more or less finished my water, not realising how far the walk actually was.

So the next 9km were tough. Approaching Carran there was a very steep incline.

While was a difficult slog, the view from the top did help to ease the pain,

And then it was on to the village of Carran.

I had planned, once I reached my B&B to go back and have a few pints in the village pub. This wasn’t to be the case. I was completely wrecked after reaching my the B&B, It had been a long day and sleep found me easy that night.