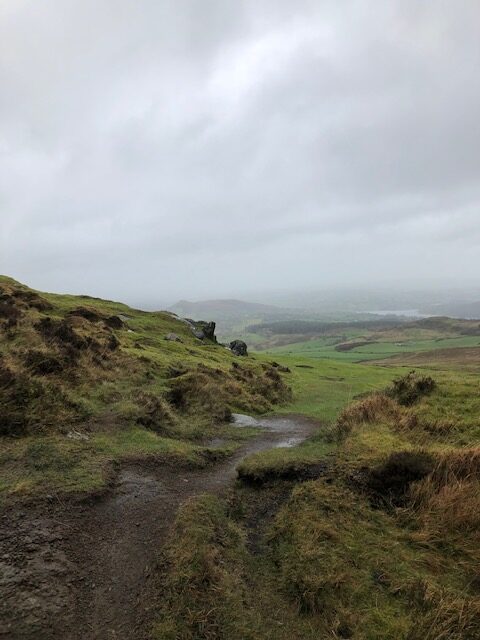 Another month, another county top. This time, Slieve Gullion, the highest point in County Armagh. The weather made this a tough trek. As such, I was glad I had some company for hiking Slieve Gullion. Luckily for me, my company was a native Armagh man, so it was also great to have some local knowledge.

Slieve Gullion is surrounded by a circle of lower hills. Together they form the Ring of Gullion which is a designated Area of Natural Beauty. With a designation like that, we were looking forward to a great climb. Slieve Gullion certainly didn’t disappoint. The only regret being the weather. The heavy clouds hindered our views especially as we moved higher uphill. Wind and rain made the hike difficult at times.

Our Route for Hiking Slieve Gullion

We started from the Slieve Gullion Forest Park. The park plays host to an adventure playpark, sensory trail and even a Giant’s Lair! Other handy facilities here are a café/shop, visitor information centre and toilets.

There is a good map of the Slieve Gullion Loop on alltrails.com. We found that the route can be difficult enough to follow on the northern side of the mountain so a map is necessary.

We arrived at the car park after about a 1.5 hour drive from Dublin. The Forest Park is a great set-up and I imagine this space is extremely busy over most weekends. The weather forecast must have been off putting for a lot of families though and we found ourselves in one of the few cars occupying the 120 or so spaces available.

We saw a lovely little red squirrel beside the playground just after we arrived. It’s still quite rare to see these guys so keep an eye out for them!

Setting Out For Hiking Slieve Gullion

We started hiking Slieve Gullion by setting out through The Giant’s Lair!

The Giant’s Lair itself is a 1.6km looped children’s walk complete with fairy houses, sleeping dragons, giant’s table & chairs and lovely art features such as The Giant Fairy-tale Book.

I’m sure children of all ages would enjoy adventuring through the Giant’s Lair. We certainly did and the pleasant forest trail gave us plenty of great views too.

The Ring of Gullion Way

After about a kilometre of forest walking, our route for hiking Slieve Gullion took us on to our first section of road walking of the day. The road is a one-way system and lightly trafficked. We only encountered a couple of cars in the 3 kilometres it took us to reach the upper car park. In fact, the majority of cars are more than likely on their way to this car park.

This section of roadway forms part of the Ring of Gullion Way, a 58km (36mi) circular route that starts and ends in nearby Newry.

We found this part of hiking Slieve Gullion to be a nice gently inclining road walk with pleasant views over the surrounding countryside. The views were quickly diminishing though as ominous clouds rolled towards us.

The rain arrived just as we reached the upper car park. Again, we found it mostly empty. 50 metres past the car park, we took a turn to the right up some steps.

To The Top of Armagh

The distance from road to summit is 1km. The path is steep at the start and zig-zags upwards initially.

The quick gain in height meant we were rewarded with more nice views of the countryside. Well kind of. The encroaching cloud meant that visibility was low.

The gradient levels off for a while after the zig-zags. Around this part of the walk, we came across a nicely built stone shelter offering some lovely views.

After the shelter, things got steep again. In places, the route got a bit rougher and required some careful footwork. While we found it all manageable, soon we encountered a new problem. While the rain had been steady enough since the car park. With each step upwards, the accompanying wind grew in severity too.

Unsurprisingly, this reached its apex at the summit of Slieve Gullion. Being at the highest point in Armagh meant there was zero shelter from the pounding gales.

Slieve Gullion has a lovely mythological and neolithic history to it. At the summit of the mountain lies what’s known as the Southern Cairn. Famed as the highest passage tomb in Ireland, you can actually explore the passage tomb through an entrance at the side of the cairn. The Slieve Gullion passage tomb is also famous for aligning with the setting sun on the Winter Solstice each December.

The tomb is also known as Cailleach Beara’s House. Ancient myth states that famed fianna warrior Finn mac Cumaill encountered a beautiful sorrowful woman at the top of Slieve Gullion. She begged Finn to find her lost ring at the bottom of the nearby lake. Finn accepted the challenge and located the ring after diving deep into the water.

When Finn returned the ring to the woman, she turned into the Cailleach or Witch of Beara and vanished into the water. Finn then noticed that he had become a withered and weak old man. His skin wrinkled and hair now white as snow. Later other Fianna warriors located Finn. When he told them his story, they searched the nearby Cailleach Beara’s House. Luckily they located a vial of antidote which cured Finn and brought back his strength and youth. His hair, however, would forever remain grey.

To Continue or Not?

Unfortunately for us, the weather meant we didn’t have any time to explore the historical summit. We actually had a brief discussion at the top as to whether to continue along our planned route at all. The briefness being out of necessity due to the pummelling wind. I even found it difficult to keep my balance at times.

While we knew the way we had come was manageable, we reasoned that once we started going downhill again, the other side of the mountain should be much less windy also. We decided to continue on and get downhill as quickly as we could.

The North Side of Slieve Gullion

Initially the paths we encountered were nice and gravelly. The wind remained strong though.

We reached the famed Cailleach Beara Lake after about 700m. Local legend has it that any one who swims there will still see their hair turned grey. Given how cold and windy it was up here, this was one legend I could well believe in.

The path turned mucky after the lake. We needed to be careful but at least with each step downwards the wind seemed to lessen and the going became easier.

The views stretched out in front of us as we made our way downhill. The thing I find about the bad weather is that it can add to the sense of adventure. We were out of the worst of it now and could relax a bit more and enjoy the experience of being out in the elements again.

The rugged mountain top changed into greener countryside about 30 minutes after leaving the lakeshore. I found it wasn’t always easy to know exactly where the trail was in this section. So a map is important.

Back to the Road

After about 8.5km of the Slieve Gullion Loop, we were back on roadways. This time the Ballard Road. We turned right on reaching the road and made our way back towards the starting point.

We travelled along the quiet roads for about 5km taking a right turn at the 13km mark to bring us uphill and back to the car park.

The rain remained a factor throughout and continued on and off for the remainder of the walk. I was defintely thankful for my waterproofs! We noted a few points of interest along the final stretch of road. We passed by the Killeavy Old Churches which date back to the 11th and 15th century. Further uphill at the churches is the Saint Moninna’s Holy Well. We didn’t get a chance to see if the well was accessible to walkers unfortunately.

At this part of the walk is also a megalithic monument known as the Clonlum South Cairn.

Nearer the car park we passed Killeavy Castle Estate. This 19th century estate house has recently been converted into a four star hotel and spa.

The last of the loop got a bit steeper and I think we were both glad to get back into the car and turn the heat on.

Overall, the Slieve Gullion Loop is a very good hike. It’s 13.5km so it’s not too onerous. The route does get steep in places so a good level of fitness is required. Care is also needed in some sections as the underfoot conditions can be a bit slippy.

The poor weather conditions took away from our experience a bit but overall it was enjoyable and I would definitely recommend it. May be one for the summer months though!!