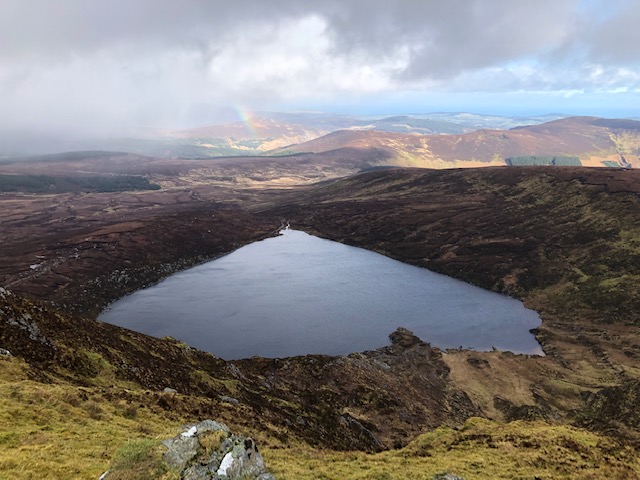 Fresh from a battering by rough weather conditions on my recent climb up Slieve Gullion in County Armagh, I decided to disprove the theory that things can only get better. Hiking Lough Ouler had the same battering gales plus the added nuisance of a couple of heavy hailstone showers.

To be fair, between the showers I did get some epic and amazing views. Overall though, the route I chose hiking Lough Ouler from Glenmacnass is not one I would recommend in Winter months. The reason for this is that you need to first get across the Glenmacnass River. The usual stepping stones are now well covered by the higher water levels from the plentiful winter rains (I’ve previously crossed this river on a lovely wooden bridge many miles downstream while hiking from Roundwood to Glenmalure – much easier!!).

Plus, the trail is very muddy in places. Especially so in the incline from the Glenmacnass River up to the base of the lake. When you add in the likely bad weather, it doesn’t make it an overly enjoyable winter hike.

The most famous thing about Lough Ouler is of course its shape. A lake shaped like a heart. What’s not to love? The lake is on the north eastern slope of Tonelagee Mountain (the third highest peak in the Wicklow Mountains). With the lake itself at an impressive 596m. The lake is what’s known as a corrie or cirque which essentially means the water is surrounded on 3 sides by cliffs in an armchair like shape.

My planned route to take in the impressive Lough Ouler was to complete what’s known as the Lough Ouler and Tonelagee Circular. The distance being just under the 8km mark. In the end, due to the weather I had to abandon my attempt to summit Tonelagee itself and instead looped around the upper face of the lake and back on to the route.

Usually on walks, you have to do a bit of work before getting to see something amazing. Not with Lough Ouler. The trail starts at Glenmacnass Waterfall car park (an hours drive from Dublin). If you’re driving from the direction of Laragh, the waterfall looms up impressively as you approach the car park.

The car park is moderately sized but gets extremely busy in the summer months. I spotted only two other cars there when I arrived on a blustery Monday in February.

So after parking up, I set out on the trail. I planned to do the route in an anticlockwise direction. This involved trekking along the river bank for just over a kilometre before making my crossing. From there it was uphill to the base of the lake. Then around the lake and a direct route back to the river, fording the river at the car park.

My first cause of concern as I started the walk was the lack of obvious places to cross the river on the return leg of the route. I remained positive though and rationalised that I could always walk back the kilometre and cross at my first bridging point. Or if I did get my feet wet, at least I had spare shoes and socks in the car which was only across the river.

The trail along the river bank was pretty obvious for the most part. Some areas were quite muddy though. It goes without saying that a good pair of walking boots is a must for hiking Lough Ouler. I knew from my map (again a must for this route) that my first crossing point was located just as the river passes a little plantation of trees.

My second point of concern was that on reaching the little knot of woodland, I still couldn’t find an obvious point to cross the river.

Without an obvious place to cross, I went for the next best thing. The proposal involved a big rock on my side of the river. On to a medium sized rock in the middle of the water and then using a small rock to reach the other bank.

I imagined myself jumping mario-esque from one stone to another.

“Should be easy enough” I thought to myself.

It’s only when you’re on top of a big rock and need to jump down to a medium sized rock that the realities of the situation hit you.

The gap in front of me was larger than I initially expected. The medium sized rock was likely quite slippery too. I decided the only sensible course of action would be hoist myself down towards it instead. With legs dangling over the side of the big rock, I extended my feet out to the medium rock. Job done.

I now had my legs on the medium rock. My body however angled at 45 degrees with my hands leaning on the big rock still. My assertion that the medium rock would be slippery had been proved correct. I now faced a bit of a dilemma.

I could push myself forwards and try to keep my balance on the medium rock. Or I could turn my body around and try to scramble back up the bigger rock. I chose option two and (just about) managed to lever myself upwards and then back on to the river bank.

I eventually found a slightly better option further upstream and ungracefully managed to scramble across while keeping my feet dry. There’s nothing quite like an adventure. I then needed to walk backwards to get back on the trail.

The route goes uphill for the next couple of kilometres. The trail was a little difficult to find at first but became more obvious as I moved uphill. I found the ground on this section of the loop extremely soft. I needed to pick my spot to make sure I didn’t sink down to my ankles in some places. As the incline is steep here, it became clear to me that you need a good level of fitness for Hiking Lough Ouler.

The great thing about steep inclines is of course the fact that you usually get great views as a result. Hiking Lough Ouler was no different. Looking back over my shoulder I could see vast expanses of open Wicklow countryside. Across the valley, I could just about make out a couple of deer picking their way uphill. Plenty of blue skies too.

The lake came into view as I reached the top of the first climb. It felt good to not be going uphill for a little while after that. The route was clearly laid out in front of me now. I needed to keep right and follow the outline of the lake as it circled uphill and up to the overhanging mountain.

“Should be easy enough” I thought to myself.

The hailstones started shortly after.

A man being regularly wrong about things is a common enough thing. Luckily for me, you get used to it after a while.

And you can prepare for it. So I took a quick stop while I put on extra layers and my waterproofs. Where blue sky had been previously, there now existed a sea of grey.

The wind was whipping and the hailstones drove at me horizontally with the force of the gale. A changeable day like today with strong winds around means that sometimes these showers can blow over quickly. Luckily this was the case and the day brightened up shortly after.

I tried my best to up my pace during the break in the showers. I got about 20 minutes. The next shower hit around at the 4km mark. Just where my route joins up with a track between the peaks of Tonelagee and Stoney Top. It took me about an hour and forty five minutes to do this first 4km.

As I mentioned my original plan was to summit Tonelagee but I had decided by this stage to shelve that idea. As such, I stayed left at the fork and took the track along the lower ridge. Very aptly, Tonelagee comes from the Irish, Tóin le Gaoith, which translates literally to “arse to the wind”.

The hailstones really started to come at me. Bigger, stronger and faster than before, the wind seemed to pick up pace across the open expanse over the lake. Unfortunately this is the most picturesque section of the walk where I should have been getting the best views of the lake. I spent the next 30 minutes staring at mostly my feet as I kept my face low into my jacket.

I had to count myself lucky that I got to take any pictures at all.

The next milestone on the trail is the summit of Tonelagee North East Top which stands about 100m lower than its sister peak Tonelagee. It’s quite easy to lose the trail here at the top so again a map is essential.

As I moved downhill, I left the hailstones behind me. As if to mock me, beautiful blue skies stretched out in front of me. I enjoyed the beautiful views nonetheless. The trail became much clearer the further I went. Again though, very boggy in some places.

Soon I could make out the tips of the trees that marked the forest in front of the car park. Right before I reached the river, the trail seemed to peter away. What made it annoying was that I could see my car at this point. So while it was obvious where I was going, the ground became very wet and it took me a while to pick my way through it.

I eventually made it to the river bank.

I decided to walk upstream until I found a good place to cross. I’ve included images from both sides of the river. The crossing still involved a sizeable enough jump across. Thankfully, I made it over with my feet still dry. Despite all of the bog, muck and winter streams involved in hiking Lough Ouler.

I reflected about the hike as I warmed up with my flask of tea back in the car. Overall, if I had got the views, the reward for hiking Lough Ouler definitely would have been worth it. So I was a little disappointed with the hike.

I had a lovely day out in nature though. About 3.5 hours in total. I still saw some amazing views. Still the same calming feeling of being out on a trail. So definitely enjoyable. I’ll mark it down as a Summer hike though and look forward to getting back up there,