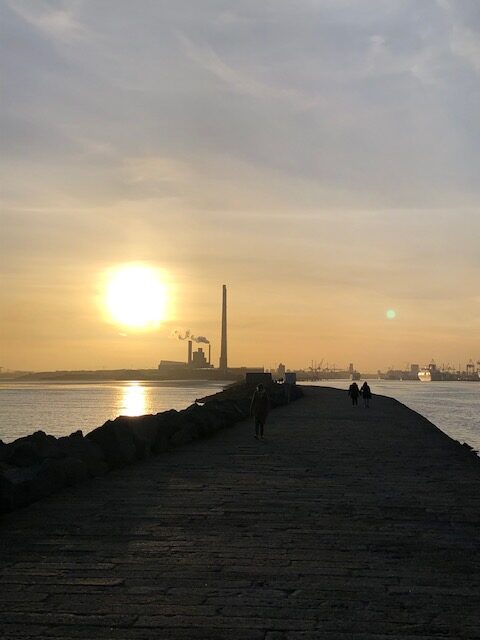 The Great South Wall Walk is a wonderful way to get up close to some of Dublin’s most iconic landmarks. The route goes past the Poolbeg Chimneys and then out as far as the Poolbeg Lighthouse. There are a number of ways to complete this walk. This article describes a lovely 11.5km out and back route that starts at the Sandymount Strand car park. From there I walked through Sean Moore Park, Irishtown Nature Park, across Shellybanks Beach and then out to the lighthouse via the Great South Sea Wall.

If that sounds like too much of a distance, or you are short on time, there is also the option to park at the Great South Wall car park itself. From the car park it is a 1.7km walk along the sea wall to the Lighthouse (and 1.7km back!).

If this car park is full, you could also try the Shelley Banks car park which is about 650m further back.

I have uploaded the 11.5km route from Sandymount Strand car park to alltrails.com

What I really love about the Great South Wall Walk is that it is so easily accessible. You can drive to any of the car parks noted above. Or you could get the DART to either Grand Canal Dock or Sandymount. Plus, Dublin Bus routes C1 and C2 service the area.

Sean Moore was a politician born in nearby Ringsend in 1917. He served as Lord Mayor of Dublin in the early 1960s. The park itself is quite small but boasts some playing pitches and a playground.

I joined the pathway at Sean Moore Park which sweeps alongside the water’s edge. After about 400m there is a fork in the pathway. I needed to stay to the stay right here. The path is very well maintained and easy enough to navigate.

If you are looking for a slightly higher vantage point, there is also a rougher earth path on the ridge to the left of the main path. There are many little tracks that join the main path to the ridge so it’s easy enough to switch between the two options.

After a while, I re-joined the main path and continued along the route with the waters of Dublin Bay on my right hand side.

There are a number of smaller tracks and trails that you can explore in what’s known as the Irishtown Nature Park. Continuing along the main path is the quickest option though and gives you lovely views out over Dublin Bay.

The path ends at Pigeon House Road. Ultimately, you need to follow this road until you reach the Sea Wall. If the tide is out, you also have the option to cut across Shellybanks Beach for a little bit before getting back to the Pigeon House Road.

I went along the beach. The sun was starting to set at this stage. I enjoyed the contrasts between the shadows formed by the sloping sun behind me and the bright blue skies in front of me.

Indeed the walk itself is a bit a bit of a contrast. So far on my walk, to my right I’d enjoyed beautiful views out over Dublin Bay while to my left had been ugly industrial buildings.

After the Shellybanks Beach is where I got closest to one of Dublin’s most famous locations, the Poolbeg Chimneys.

The Chimneys are part of the Poolbeg Power Generating Station however they have not been operational since 2010. Despite what some people would describe as the ugly industrial nature of the chimneys, they have become famous. With the low rise nature of Dublin’s skyline, the chimneys are a visible landmark from all across the city.

For many people flying into Ireland, they are the first thing to be noticed as their plane descends into the capital. A sure sign for returning emigrants that they have indeed returned home.

I arrived at the Sea Wall about 4km into my walk. A Sea Wall is manmade embankment usually used to prevent erosion. The Great South Sea Wall is slightly different in that the purpose is to deal with the problem of silting and sand banks which had been a long running problem in Dublin Bay, particularly around the mouth of the river Liffey.

Work to deal with this silting problem started as far back as 1717. With work on the current stone pier structure started in 1761 and completed in 1797. The massive granite blocks used were taken from quarries in nearby Dalkey. There’s a lovely Killiney Hill walking route that actually goes right beside the Dalkey Quarry.

Today the Sea Wall serves as a popular promenade for locals with a  steady stream of walkers, joggers and dog walkers enjoying the 1.7km stroll to the lighthouse.

I took advantage of one of the coffee vans at the start of the Sea Wall and grabbed a cup to keep me company for the stroll out to the lighthouse. Despite the blue skies, I was feeling the cold as the sea wall walk is totally exposed and can get very windy.

The big red lighthouse at the end of the Great South Wall is another well-known Dublin landmark. The Lighthouse, originally built in 1767 (and re-designed in 1820) is still in active service.

I took some time to just sit at the end of the Pier. I found it be a fantastic place to sit and watch the world go by. Not only my fellow walkers but also the steady stream of boats and ships going in and out of Dublin Port. Soon it was time to leave this this fantastic location though and I made my return journey.

Back to the Start

This time the setting sun was right in front of me as I walked back. As such, I got to enjoy the majestic sunset over Dublin City as I completed the 5.75km return leg.

The route is an out and back walk so I simply had to retrace my steps.

I would highly recommend this beautiful city walk. The walk can be tailored to suit what time is available to you. Plus, the Great South Wall Walk is so close to the city centre which means it’s really accessible. Definitely, a great way to see the city from a different point of view.