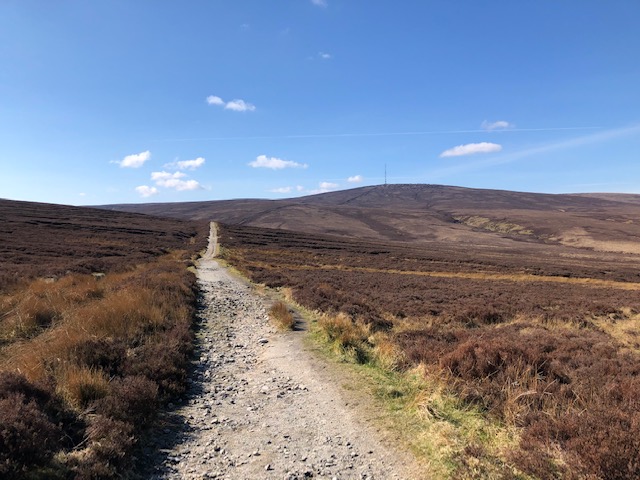 Kippure is the highest mountain in Dublin at 757m and the 56th highest peak in Ireland. The top of the mountain holds a large television mast that makes Kippure quite distinguishable from long distances away. Climbing Kippure is relatively straight forward and a great way to spend a few hours.

There are a few of ways of climbing Kippure. The easiest is the 6.8km out and back route via the access road from Old Military Road right up to the mast at the top of Kippure. While the access road is very well maintained and provides good views over the Wicklow Mountains, I found it to be not the most exciting of hikes.

At the other end of the scale is climbing Kippure via Lough Bray. See link to map of this route on alltrails.com. I have never walked this trail before but fellow hikers have told me that after Lough Bray there is not much of a navigable trail. The route involves trekking across very soft bogland on the approach to the summit Kippure. So I would be very cautious about taking on this hike.

Somewhere in the middle in terms of toughness is the 9.3km out and back route from the Featherbeds area of the Old Military Road. The trail is a mixture of gravel roads and earthen tracks along the Wicklow-Dublin border straight up to the top of Kippure. This is the one I focus on in this article.

I’ve uploaded a map to alltrails of the route for climbing Kippure from Featherbeds.

Getting to the Start

As mentioned above, the starting point is the Featherbeds section of the Old Military Road (link to google maps location here). Parking on this location is pretty much just at the side of the road. We found plenty of space to pull in despite there being about 6 or 7 cars already at the start point.

My wife was my companion for this hike and we set off straight away after parking the car.

The First Section of Climbing Kippure

We were lucky enough to get good weather for our hike with lovely blue skies overhead. Despite this and as always seems to be the case, we found it very windy on the exposed mountain side. I was glad we had prepared well and had plenty of layers on.

The first 2.4km of the trek to Kippure are along an easily navigable gravel pathway. This path effectively marks the border between counties Dublin and Wicklow. So to your right is Dublin and to your left is Wicklow.

Keep an eye out for some lovely views of Bohernabreena Waterworks and Reservoir on the Dublin side.

After the gravel path ends it’s on to a trail through bog and gorse land. We found that in general the route quite clearly laid out in front of us as the track goes up towards the television mast on the summit.

While the trail is easy to locate, we needed to take care along the way as we found the ground quite wet and boggy in some places.

We also had to pick our path across little stream and puddles along the way. It all added to the fun of it though.

As we approached the summit the landscape changed completely. The gorse disappeared entirely for a while and it was all bog land around us. Being from Westmeath, I’m obviously used to bogs. Still, I found this landscape a little surreal. With the slope of the mountain, there were times when all we could see was the desolate peatlands.

As we got to the very top we came across slightly more vegetation but the landscape remained quite barren.

The Summit of Kippure

The television mast which had been our orientation point for the entirety of the walk now stood in front of us at the top of Kippure. Because of the mast, we needed to walk around it to get full 360 degree views of the surrounding countryside. We were thankful for the clear day as the views very hugely impressive.

After taking in the views, it was simply a matter of turning around and going back the same way we came up. Overall it took us about an hour and a half to reach the summit and maybe an hour or so for the descent back down again.

Reflections from the Top of County Dublin

Climbing Kippure is a very achievable county top. While a decent level of fitness is required, the climb should be manageable for most people. As a result, we saw a good few families on our hike. And I think that sums it up pretty well. It is a nice family hike  with great views over the Wicklow and Dublin countryside.

We both thought it was thoroughly enjoyable and a great way to spend a morning.

Finally, an interesting fact about Kippure is that it is the opening peak in a 100km mountain running race known as the Wicklow Round. The record for the 100km race over 26 different mountain summits is just over 15 hours!