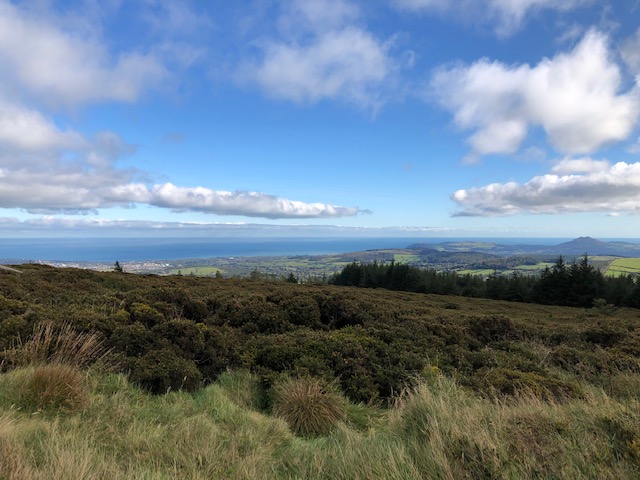 What are the best Dublin walks? It’s such a hard question that I don’t think any two people would give you the same answer. A lot of people have an opinion on it though. With that in mind, I’ve compiled a list of 9 of the best Dublin walks on offer in the capital. So, have a look and see what ones you have completed. Or use this list as an inspiration for the next time you get the urge to go hiking in County Dublin.

The below article lists some of the best Dublin walks by distance. Starting with the shortest and building up to the mammoth Dublin Mountains Way that weighs in at an impressive 42km!

I’ve given a short summary of each of the best Dublin walks but if you want more information, just click on any of the headings for a detailed guide to each of the hikes.

Blessington Street Park lies in the heart of Dublin’s city centre. The park is made up of an old reservoir (Blessington Street Basin) enclosed by stone walls with a walking route around the perimeter. This adjoins 600m of linear park which was formerly an offshoot of the Royal Canal. My recommendation is to start your walk from the Royal Canal, following the (now filled in) route of the former canal to the linear park and then finishing the walk with a circuit of the Basin itself. This walk is a beautiful oasis of calm within the city.

These are two lovely walks in south Dublin that start more or less beside each other. The Lead Mines Way is 2.3km long. The highlights being the wonderfully preserved lead mines chimney and the views from the top of Carrickgollogan Hill.

The Scalp Lookout Trail is a pretty forest walk best known for the Scalp lookout point which offers some amazing views.

The Hellfire club has to be one of the most popular walks in Dublin. As with all great walks, the route sprinkles in some history, a great workout and stunning views. While you’re at the Hellfire Club, take in the adjoining woodland trail through Massey’s Estate.

Despite being Dublin’s highest point, Kippure is a relatively straight-forward mountain to climb. Give yourself a few hours for this picturesque out and back route.

My favourite trail in Dublin has to be the Killiney Hill walk. I have documented a beautiful walk that includes Killiney Hill, Dalkey Hill, Killiney Beach, Whiterock Beach, Killiney Hill Park, Dalkey Quarry, the Dalkey Semaphore Station, some great outdoor sculpture work, the Killiney Obelisk, some pyramids and the pretty village of Dalkey.

A lot packed into a 9.5km walk! Plus, the fabulous views of Dublin Bay from Howth Head to Bray Head. No surprise therefore that this is my number one recommendation when people ask for walking suggestions in Dublin.

You have a number of ways to complete the Great South Wall walk. My guide provides details of one of the longer distance options from Sandymount Beach out as far as Poolbeg Lighthouse and back again.

Another great Dublin walk that is really accessible for city-dwellers.

Dublin famously is home to the largest walled park in Europe. What better way to explore it than to complete the lovely perimeter walk of the park. I found this walk to be a great way to see loads of different aspects of Phoenix Park such as the People’s Flower Garden, the Wellington Obelisk or Magazine Fort.

My two favourite parts of Phoenix Park are the views over the River Liffey between the Island Bridge and Chapelizod entrances and the streams and wooded area of Furry Glen.

As with a lot of the best Dublin walks, you can find plenty of nice options for coffee and snacks along the way. The Hole in the Wall is a really good option on this front.

Keep an eye out for Deer along the way. Or the lessor spotted Phoenix Park goose.

I’ve written extensively about the Royal Canal Way. So much so that I needed to write two articles about the Dublin section of this fantastic walkway.

The first being the section from Spencer Dock to Ashtown with the second being from Ashtown to Maynooth. While Maynooth is in County Kildare, the extra 9km past the Dublin border are well worth including.

The thing I like best about the Royal Canal Way is that the train line follows the canal. So you can take on different sections of the walk and return at your leisure by train. Then start the walk again where you left off previously.

I think the Dublin Mountains Way is a really impressive long distance walk. The linear route is between Shankill and Tallaght. While it is achievable to complete the full 42km in one day, it is a major challenge to take on.

As such, my recommendation would be to only complete the first 30km or so as far as Glencullen. Ideally, to finish at Johnny Foxes pub in the village and treat yourself to a well deserved pint! I found the last 12km to include a lot of road walking. The main attraction for the final section is the Scalp Lookout from the top of Barnaslingan Woods. As highlighted earlier in the article, you can enjoy this separately as part of the Lead Mines Way and Scalp Lookout Trail.

What Have I Left Anything Out of the Best Dublin Walks?

Loads probably. The above is my view of the 9 of the best Dublin Walks. Dublin has so much more to offer. The best way to do it is to get out there and experience it for yourself. I hope that this article will help inspire some hiking adventures. Feel free to get in touch and let me know if there are any other Dublin walks that need to be added to this list. Get in touch via wildirishwalks@gmail.com