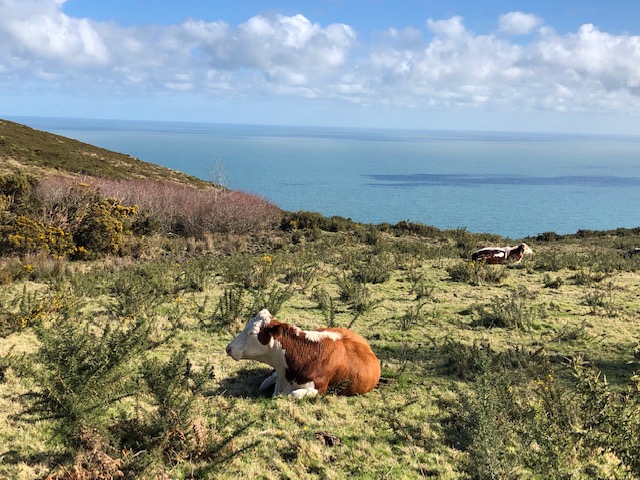 The Bray Head Cliff Walk is a wonderful trail. The walk is easily accessible with numerous public transport options available to get to Bray. The route starts from right in the town which means you have loads of great options available for both pre and post walk food and drinks. Additionally, the Bray Head Cliff Walk should only take you 2.5/3 hours, so you could plan for another activity in the town of Bray.

The walk itself offers spectacular views out over the Irish Sea and is really enjoyable. My version of the walk is just over 9km in distance with some steep sections. So a good level of fitness is required. This article outlines the details with an overview of how we got on when we completed the Bray Head Cliff Walk on a sunny Saturday morning.

I’ve uploaded a map of the 9km Bray Head Cliff Walk to alltrails.com. We started from the Bray Train Station car park, walked along the seafront, then upwards along the cliff walk. After roughly 4km, we turned right and away from the cliff edge and upwards with the return being along the path between Bray Head Hill and Bray Head itself. From Bray Head, it was downhill and back to the promenade.

We had three participants on our Bray Head Cliff Walk. Kevin and I shared a lift while Dave got the DART. Depending on traffic, it is roughly a 45 minute drive from Dublin to Bray. The train service is quite reliable with DART trains arriving in Bray every 15 minutes or so. Bray is served by Dublin Bus 145 and 155 routes.

Starting off on our Bray Head Cliff Walk

Kevin and I arrived slightly early in the car. After putting some coins in the meter we decided to wait for Dave on the seafront. The car park is only about a 3 minute stroll to the beach and we picked up a nice coffee from Catalyst Coffee as we waited. The coffee shop seemed to be doing a brisk trade on the Saturday morning we were there which is always nice to see.

We didn’t have long to wait for Dave and soon we were off. Coffees in hand we took a gentle pace along the tarmacked walking path in front of the beach. The sun shone gloriously down on us and I felt the wonderful sense of anticipation that only comes when you get beautiful blue skies for a walk.

I don’t always have company for my hikes but really enjoy it when I do. Kevin’s questions about the number of turrets on show along the Bray seafront gave an indication of the insightful conversation we would have for the remainder of the trail.

I looked it up after and found out the majority of the seafront houses were built in the 19th century when Bray prospered as seaside holiday location for the residents of Dublin. The buildings have mostly been converted now to pubs, restaurants and guesthouses but still retain a sort of fading Victorian charm. The turrets play a part in this but I don’t know what tangible benefit they would have provided to their 19th century owners. Nevermind the current ones.

We maintained our easy pace along the 1km stretch of promenade. Bray Head loomed above us and we could just about make out the large cross that marks the 241m summit.

We started to move upwards and to what is known as the Bray to Greystones Cliff Walk. This cliff walk is hugely popular with most people walking the 7km in one direction and then getting the DART back to where they started. Unfortunately, the full Bray to Greystones walk is temporarily closed (at the time of writing) due to rock falls on the Greystones side of the walk. You can check on the bray.ie website as to whether this route is currently open or not.

The cliff walk as we know it was developed in order to facilitate the construction of the railway line between the towns of Bray and Greystones. Work commenced in the 1840’s and the movement of workers and materials meant the development of the cliff walk that still exists to this day.

We continued along the old workers path for about 2.5km. The trail started off as well tarmacked pathway. It became a little rougher as we moved along but the gravelled paths were easy to navigate.

This section of the Bray Head Cliff Walk is usually thronged with people completing the more popular Bray to Greystones Cliff Walk. With the temporary closure of the cliff path near Greystones, we pretty much had the route to ourselves. We noticed a few other groups of people but the path never seemed busy.

The views over the Irish Sea were amazing in the morning sun.

Just after the 4km mark we came to the turn to the right to bring us up towards Bray Head Hill. We noted the turnoff but continued for a short section further along the cliff walk path.

The reason for this was that we wanted to take a little path to the left which offers some lovely views from Cable Rock. I’ve noted this little offshoot on the alltrails map above.

We then re-traced our steps and started the climb up towards Bray Head. I found this to be the toughest section of the trail. The reason being that this was the steepest section of the route. The trail also narrows as it passes through sections of gorse and brambles. We found it manageable though and anyone with a moderate level of fitness should be able to complete it also.

As always, the higher we went, the better the views became.

Between the Hills on the Bray Head Cliff Walk

We reached a plateau at roughly the 5.5km mark. To our left we could see the summit of Bray Head Hill with Bray Head itself to our right. We walked for about 1.5km on the well maintained path between the two.

As with the earlier sections of the walk, we really enjoyed the stunning views as we moved along the generally flat terrain. The gentle turns in the path meant we experienced both lovely sea vistas and views back over the Wicklow Mountains towering in the distance.

Just before the 7km mark we reached Bray Head. The summit is easily identified with a large cross sitting atop the hill. Here the crowds were more plentiful. Many people walk directly from Bray up to the top of the hill. This would be our route back.

The Return to Bray

We took some time to take in the beautiful views over the Bay and then started on our descent. We followed a well-worn path downhill eventually coming to a woodland area.

I needed to take a little bit of care on the section through the trees. I found the trail steep and a little slippy in places.

After 8km we were back to the path leading to the promenade. From there it was straight forward to complete the last kilometre in front of Bray beach

We took advantage of the plethora of food options along the sea front in Bray and had lunch in the Maison Moli Café. The food was nice there. Then another coffee from Catalyst for the trip home. There are plenty of other food and drink options in the town. You can find more information on Bray.ie.