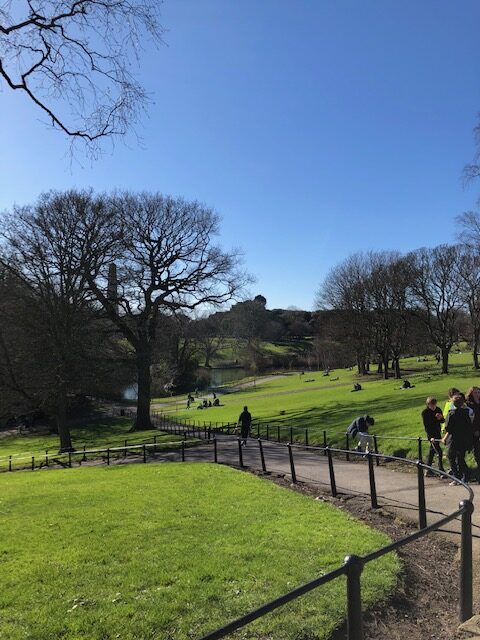 The Phoenix Park is the largest enclosed park in Europe. The Park dates back to the 1660’s where it was originally a royal hunting ground. Eventually opened to the public in 1747. This post discusses the lovely 12km Phoenix Park perimeter walk. The park still has a herd of deer. They wander right across the 1,750 acres of grass and woodland of the park. So keep an eye out!

What’s in a Name?

The naming of the park has nothing to do with birds from Greek folklore that arise from the ashes. Rather, it is an anglicisation of the Irish term ‘fionn uisce’ meaning clear water.

Busy at the Weekends!

Phoenix Park can be an extremely busy place. Especially during fine weather. This is not surprising though as the Park is so large and so central in Dublin that it falls within 5km of hundreds of thousands of people living in the capital. This blog post explores a walking route within the Phoenix Park that avoids the busier sections. It is a lovely walk, so if you are looking for a great 12km route in Dublin, this could be the one for you!

There are just over 11km of stone walls surrounding the Park. You cannot walk directly alongside the walls for some sections so the extra back and forth will bring this route to the 12km mark.

We started from the Ashtown gate. However because this is a looped walk you can start from any point.

After entering through the Ashtown gate, we took an immediate left and followed the wall of the Park through the trees. The good thing about this walk is that it’s easy to follow. Basically, keep the walls to your left at all times. There are well worn tracks to move along. Although it can be a little mucky in places.

We soon passed by the Specialist School and then the building affectionately known locally as the “Witchy House” along the way.

Next up was the gate to the aptly named “Hole in the Wall” pub. They have a coffee van/hut in the the carpark just on the other side of the Phoenix Park walls. It’s a good place to stop for a nice coffee. Be warned that queues can be long on busy days. A Pro Tip is that you can also get the same coffee by going into the main pub building itself. The queues here can be a little shorter.

The perimeter walls then run parallel with North Road for a while.

While the footpaths are busy here, if you use the earthen tracks between the wall and the footpath it is a lot quieter. The zoo is now on your right hand side. You can sometimes hear the animals and it is somewhat surreal to hear the trumpeting of elephants while you take in your city centre walk.

As we continue, we pass by the headquarters of An Garda Síochána. Around this point, we get our first glimpse of the Wellington Obelisk in the distance. We will get much closer to that later!

Much nearer to hand and next for us to pass through is the People’s Flower Garden. This is a well maintained enclosed flower garden. If you have time it’s well worth a stroll around to take in the lovely flowers and large ornamental lake.

After the People’s Flower Garden we cross the main thoroughfare which is called Chesterfield Avenue. Here is the first time we lose sight of the Park walls as we must walk up Chesterfield Avenue for a small section before turning left to walk in front of the Wellington Obelisk. The monument stands at 62m/203ft and is the largest obelisk in Europe (10th largest in the world). Built as a testimonial to the British politician and general, the duke of Wellington. Wellington was actually born in Dublin. Completed in 1861 which was an amazing 44 years after construction began.

After the Obelisk, the perimeter walls run along Conyngham Road. We found this to be one of the more overgrown sections of our walk. However it is still easily enough to get through with trails through the greenery. There is a footpath further up the slope if you think you will have any difficulties.

From here you get a good glimpse of the train tracks coming from Heuston Station. The tracks go underground before entering Phoenix Park, travel under the zoo and eventually link up with the train line to Connolly station. The tunnels under the Park were built in 1877 and lay largely unused for long periods before finally being reopened for regular passenger trains in 2016.

Views Over The River

The next focal point we meet is the Islandbridge entrance. Then it’s uphill to probably the highest section of the perimeter walk. The added height gives a lovely opportunity for taking in the views. Particularly nice is the outlook over the river Liffey and the War Memorial Gardens.

There are plenty of people walking, cycling and jogging along here but soon we are into much quieter sections of the Park. You almost feel like you have the whole place to yourself.

This isolated feeling continues as you walk past the pedestrian gate at Chapelizod. The walls and parallel pathway undulate with the rolling hills until we reach Furry Glen.

The Furry Glen is my favourite section of Phoenix Park. Flowing streams, picturesque woodlands and walkways through this semi wild section of the Park makes it a lovely section to walk through. Be warned though, because of the wilder nature of this part of the Park, it can be a little tricky to traverse. Think mucky paths, uneven slopes, jumping across small streams type of thing. All in all, I feel it adds to the sense of adventure. If that doesn’t sound like your type of thing, there are other more navigable paths around this section.

After Furry Glen, we reach the Knockmaroon entrance and get glimpses of the Mount Sackville Convent and School. From there the walls continue until we get to the entrance of Farmleigh.

Again, if you have the time, Farmleigh is a wonderful place to walk around in itself with lovely gardens, a beautiful old house and a really impressive clock tower.

We cross Chesterfield Avenue again at the Castleknock entrance. After that it is a familiar mixture of trees and parkland until we eventually complete the loop back at the Ashtown entrance.

Overall, we really enjoyed this lovely looped Phoenix Park perimeter walk. It’s particularly nice when the weather is good. The great thing about it is that it’s relatively quiet no matter what the levels of crowds are like inside the Park.