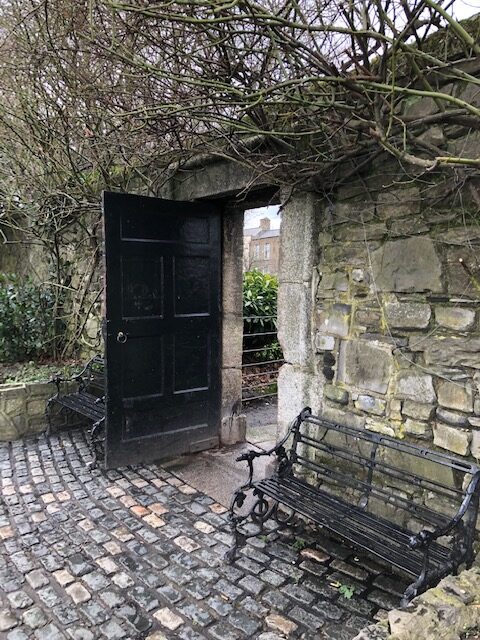 Blessington Street Basin is one of Dublin’s hidden gems. The park is located in the heart of the city and quite rightly known as Dublin’s secret garden. Comprising a 600m linear section of what was formerly a leg of the Royal Canal connecting Phibsborough to Broadstone plus the old reservoir itself.

Now known as the Blessington Street basin, the reservoir construction was completed in 1810. The purpose was to store and distribute water to the north of the city. It continued to operate as such until 1865. Thereafter while not providing the general public with water, it did supply water to the local distilleries (Jameson and Powers) right up the 1970s. At this point it was opened as a public park but fell into general disrepair until major refurbishment works took place in the 1990s.

Links to the Royal Canal

I like to take in Blessington Street park as an offshoot to walking along the Royal Canal. From Cross Guns bridge in Phibsborough, follow the road (Royal Canal Bank also known as Eglinton Terrace) on the south side of the canal and go towards Drumcondra. After only 100m from the bridge, Royal Canal Bank/Eglington Terrace sweeps around to the right. We are now on the old Broadstone leg of the canal.

Mountjoy prison walls are on your left and the grass and trees in front of the walls is the infilled canal. The famous Irish folk song “The Auld Triangle” is set in Mountjoy prison;

“the auld triangle went jingle jangle, all along the banks of the royal canal”.

Brendan Behan composed this song and a statue of him now sits on the Royal Canal near Binn’s Bridge.

Continue along Royal Canal Bank/Eglington Terrace until you come to a small laneway that will bring you to the busy North Circular Road.

The Phibsborough Library will be on your left. Construction completed on the Library in 1936. Nine years after the canal was filled in in 1927.

You can now see the start of Blessington Street Park for the first time. It’s interesting to note the street names. e.g. Royal Canal Bank, Blaquiere Bridge at Inns Quay… However the canal, bridge and quay all no longer exist.

There is a statue of a soldier at the entrance to the park. Commemorating the Dublin Brigade of the Irish volunteers that was founded in 1913 and fought in the 1916 Easter Rising and Irish war of independence.

The narrow tree lined pathway of the park then follows the route of the infilled canal.

After about 350m you get to the entrance of the Blessington Street Basin. As you’d expect from this secret park, the entrance is just a small doorway.

I enter the basin to hear the sound of water from fountains. This soon leads to the sight of a large expanse of water.

Surrounding the square on all sides is high walls with plants, tree and benches along the walls. The park itself feels like an oasis in the capital as above the walls the chimneys, roofs and higher rise buildings of the city frame the skyline.

The whole perimeter of the Basin is only about 500m and it’s a nice stroll around. There is plenty of birdlife on the water and on the artificial island in its centre. Ducks and seagulls are the most plentiful but I also spotted a heron on my walk and there are regularly swans to view as well.

Swans are only able to take off and land on water and they need a long runway to do so. As such, the small area of water sometimes causes them difficulty in this regard. On occasion, swans mis-time their landings. Resulting in them getting stuck in nearby gardens and laneways.

James Joyce notes The Basin in Dublin’s most famous piece of literature, Ulysses;

“As they turned into Berkeley Street, a street organ near the Basin sent over after them rollicking rattling song of the halls. Has anybody here seen Kelly? Kay ee double ell wy. Dead march from Saul. He’s as bad as old Antonio. He left me on my ownio. Pirouette!”

Also of note in the Basin is the nice looking gate lodge in the north east corner and the series of bronze sculptures in the northern wall.

Moving back to the linear section of the park which continues as far as Broadstone again following the old canal route. The walking route continues until you come to the intersection of Constitution Hill Road and Western Way. This is an area that is almost unrecognisable versus what it would have looked like 100 years ago. Back then at this point the canal flowed over a viaduct that went over Constitution Hill road and into a deep canal harbour at Broadstone. The canal travelled in front of the neo-Egyptian style Broadstone train terminus. It is now a Dublin Bus Depot.

Train travel and transport became more popular greatly reducing the demand for the canal. As a result, the 1920s saw the in-fill of the canal. The Western Way road subsequently continued to use the viaduct for road traffic over constitution hill road. The train station usage was in decline too. The last train from Broadstone was in 1937. Dublin City Council demolished the viaduct in the 1950s due to the traffic congestion that it caused. As a result, leaving more or less the current layout for the area as we know it today. The major additions of course being the new Luas stop in front of the Broadstone building plus the current ongoing major works on the Dublin Institute of Technology Campus.

And so that brings me to the end of the Blessington Street Park walk. In short, an unexpected park in the heart of an ever changing city. Who knows what the next changes to the city will look like. Or what this area of the city will be like after the next 100 years.