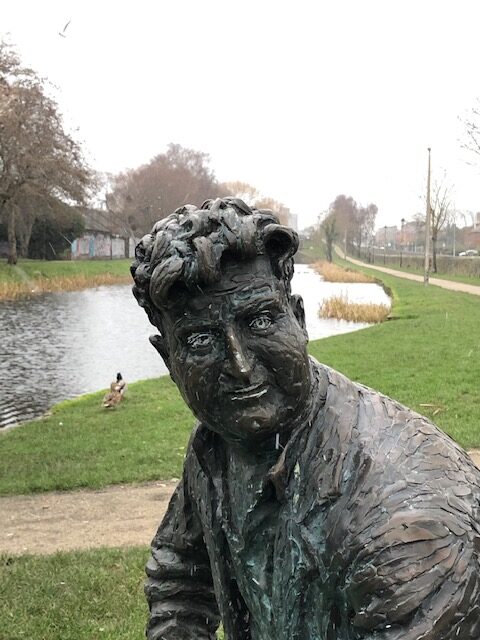 I’ve previously written about walking the Royal Canal Way from Ashtown to Ballynacargy. This time I am taking a look at the initial stages of the Royal Canal Way to Ashtown. Firstly starting from the Famine Memorial on the banks of the River Liffey I walked the 8.1km to Ashtown through intermittent February snow and graupel showers.

This section of the canal is completely urban. As such, it has a much different feel to the rest of walking the Royal Canal Way. To be honest, it suffers from a number of issues you would associate with a canal in the city. For example, shopping trolleys abandoned in the water type of thing. There is litter along the route, the possibility of encountering some anti-social behaviour cannot be ruled out and graffiti regularly blights the eyeline. Despite this there is much to enjoy on this walk. That is to say, the industrial nature at the start of the walk has its own lonely desolate beauty to it. In addition, there is plentiful wildlife along the trail. Finally, there is history at every turn. All in all, the positives outweigh the negatives!

Probably the biggest historical event to rock this nation was of course the Great Famine. The National Famine Way is a walking route that starts in Strokestown, Co. Roscommon before joining the Royal Canal in Cloondara, Co. Longford and following the Royal Canal Way until it reaches the Liffey at Spencer Dock. The National Famine Way then walks along the banks of the river culminating at the Famine Memorial at Custom House Quay. The route from Strokestown replicates the path taken by 1,490 people in 1847, who walked this 165km in search of ships and a pathway to a new life in North America.

I am starting my walk at the Famine Memorial at Custom House Quay. It’s eastwards then to North Wall Quay where we first glimpse the Royal Canal as it meets the Liffey. The architecture along this first 600m of riverbank casts a reflection back on Irish history also. The bridges in particular named after Ireland’s playwrights and authors Sean O’Casey and Samuel Beckett.

Leaving the river I start along the canal and Spencer Dock, which was constructed in 1873 as a canal and railway depot. Named after an English politician who acted as Lord Lieutenant of Ireland at the time.

Here we get another reminder of Ireland’s creative past with the Luke Kelly statue. Kelly was a member of the Dubliners and is regarded as one of Ireland’s greatest ever singers. Kelly grew up in the nearby Sheriff Street. A theme of this walk is contrasts and it this is a perfect example. A statue of a local working class hero on the dock named after a foreign aristocrat.

I do question the planning of the statue through. Behind the statue is the incredibly ugly looking Sheriff Street Lifting Bridge. Due to the direction that the statue is looking it’s almost impossible to get a picture of the statue without the rusted bridge in the background.

After the Luke Kelly Statue I crossed Sheriff Street and on to the new Greenway section of the Royal Canal Way. The 750m section of walkway and cycle path was officially opened in 2020 following construction costs of €8m. The bulk of this cost was a new viaduct bridge over the canal and railway line.

It’s along this section that I really get the sense of lonely desolation spoken about earlier. Perhaps it’s because I am walking the route on a wintry Monday morning. The surroundings feel heavily industrialised due to the railway yards and depots. I pass by a half sunken barge in the water. I get the impression the vessel has been abandoned there for decades. When I look back towards the city, it is a sea of cranes that dominate the skyline. The background is that of apartment blocks and large office buildings. Again, the view in the distance such a contrast to where I am standing.

I pass over the new viaduct and can see Effin bridge below me. This is a flat bridge that allows the railway line to pass over the canal. Reputed to be named Effin bridge given the difficulty in lifting the bridge to allow boats to pass. Causing people to give out about that Effin Bridge.

It’s on to Newcommen Bridge after the viaduct where I cross North Strand road and continue along the canal. Lock number one is located here. I fight my way through a flock of pigeons who have congregated around a group of women feeding them bread. Croke Park looms in the distance.

The giant structure becomes clearer as I continue. The canal actually passes under the Davin Stand of the stadium (also known as the Canal End). The Headquarters of the GAA can accommodate just over 82,000 people.

You feel the history wrapped around this stadium too. As I pass by the stadium I am walking under Clonliffe Bridge. This bridge is where the first shots of the first Bloody Sunday atrocities were fired by British soldiers. The soldiers were aiming at civilians in a crowd attending a match at Croke Park in 1920. The first volley of shots from this bridge would kill two schoolboys aged just 11 and 14. These boys were sitting on a wall and in a tree on the far side of the canal. Just trying to get a glimpse at the game. In all 14 innocent people would be killed by British forces in the stadium on that day.

Past Croke Park, the canal moves up through Drumcondra. Just after Binns Bridge/Drumcondra Road I come across another statue. This time commemorating poet, author and playwright Brendan Behan. Most famous for his autobiographical novel Borstal Boy which recounts the authors time in the infamous English prison.

I find the section of canal between Drumcondra and Phibsborough is probably the best maintained area that I come across on my walk. It’s also the first section where I see any significant number of people with lot’s of walkers and joggers out and about. Many of the walkers are carrying coffee cups from some of the nearby coffee shops and this is a good place to pick up some refreshments if you wish.

A nice extension to this walk would be to go to the Blessington Street Park which is just a few hundred metres from the canal here.

After Cross Guns bridge in Phibsborough is where the birdlife along the canal really comes into it’s own. Passing by ducks, water hens, herons, swans and even a cormorant between here and Broombridge. I was lucky enough to get a lovely video of two swans landing on the water following a short flight. I recommend keeping the sound on for the below video!

The last item of historical significance I note is at Hamilton Bridge. The Bridge is located beside the Broombridge Luas station and is named after Irish mathematician William Rowan Hamilton. Hamilton was out walking one day and had a eureka moment. Not wanting to forget the brainwave, he inscribed an equation into the stone of the bridge. The equation now forms a central part in a branch of mathematics called quaternion algebra. While I have absolutely no idea what quaternion algebra is, seemingly it’s a big deal and forms part of modern day GPS systems and computer graphics. Hamilton worked in the nearby Dunsink Observatory and there is currently a campaign to create a Hamilton walking route that would link Hamilton bridge to the observatory via the Royal Canal Way, Ashtown and the Tolka Valley.

To Ashtown and the end of the walk

After Broombridge it’s onwards towards Ashtown. I pass by the building work on the Pelletstown train station on the way. It’s around here that I pass the last of the industrial zones and into much more residential areas. As a result the number of pedestrians using the canal path increases. So does the number of ducks though so it’s all ok.

The train station station in Ashtown offers the opportunity to get public transport back into the city centre if required. Or if you’re feeling energetic, you can keep walking the Royal Canal Way.