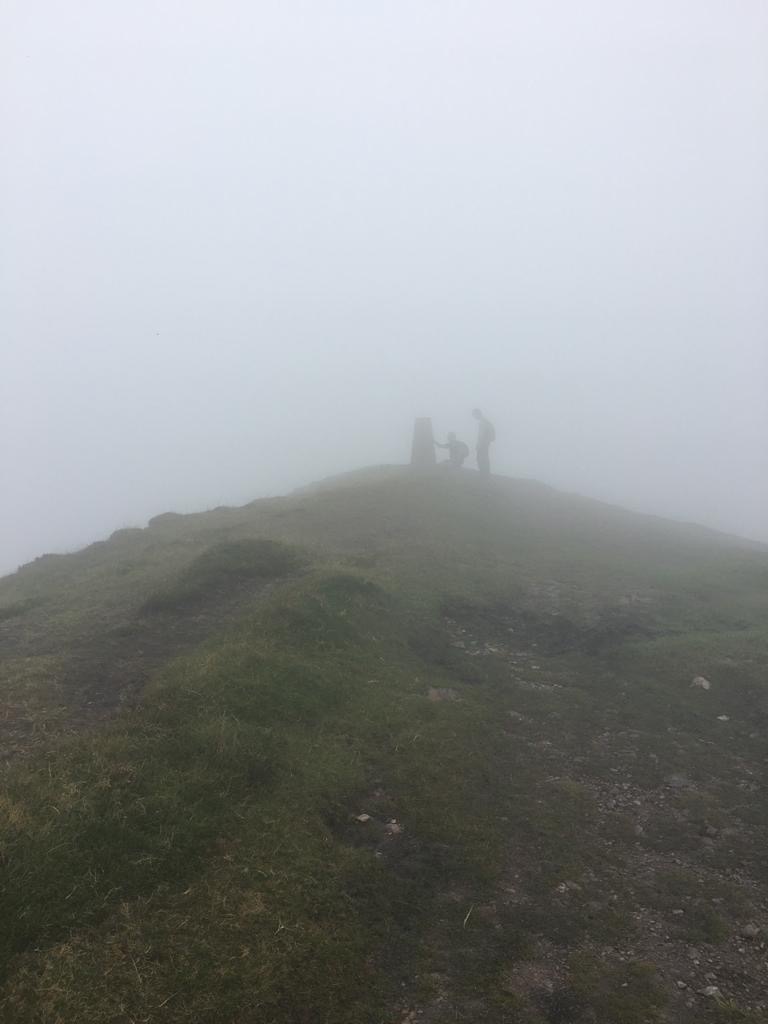 The mountain is accessible from it’s western side at the Vee Gap (R668).

Why Climb Knockmealdown Mountains from the Vee?

An old friend, Tim, got in touch and suggested we meet up as we hadn’t seen each other in an age. With Covid restrictions causing havoc on the world, we decided that an afternoon of mountain climbing in the open countryside would be the most appropriate and safest way of doing things.

The only problem being that Tim was in Kerry and I was based in Dublin.

Our solution was to meet up somewhere near the middle. We decided to do the Knockmealdown. With a plan in place, we agreed to meet in the Vee carpark the next Saturday.

The Vee being a hairpin bend in the R668 offering panoramic views of the surrounding mountains and valleys. The below Knockmealdown Mountains Hike from the Vee took us just over 4 hours.

I decided to make things a little easier on myself and stay with my Sister in Wexford the night before. My rationale being that it would shorten the drive to The Vee the next morning. This plan was slightly undone by me sleeping in and my sister cooking me such a lovely breakfast that I couldn’t rush it.

Out on the road and I typed in “The Vee” to Google Maps. I got a result in County Waterford and pressed ok. Off I went. It turns out there is another Vee in Waterford. I figured I was in the wrong place when I reached Lemybrien and The Vee was beside a petrol station.

A quick call to Tim confirmed my suspicions. I was in the wrong place! And still 40 minutes away from my intended destination. Luckily Tim hadn’t arrived there yet. I was all apologies when I finally arrived at the Bay Lough Car Park.

My advice is you should input “The Grubb Monument” if you want to get an accurate Google Maps location for directions to this Knockmealdown Mountains Hike from the Vee.

Tim had told me earlier that his cousin Ray was going to join us for the hike also. So I now had two Kerry men for company rather than one. One thing was for sure, the conversation was going to flow for the duration of the walk.

Rather than walk along the busy(ish) R668, we drove towards the Vee and parked on the opposite side of the road from the Grubb monument. This is about 150m before you get to the Vee with plenty of room to park safely.

Now we had to address the elephant in the room. While there was beautiful sunshine almost everywhere in the country; the Knockmealdown range shrouded in fog. We decided that we might as well continue in any event and see how we got on. This wouldn’t be the worst weather I’ve ever hiked in.

We could see the Grubb Monument from the road and we made our way up the path towards it. This is a large stone cairn and marks the place where Samuel Grubb was buried in 1921.

We continued upwards along the stone path towards the top of Sugarloaf Hill. Despite the fog, the path was easy to follow. In saying that, it’s a steep start to the walk. So be warned!

Near the top of Sugarloaf Hill is a large stone cairn. We stopped for a water break and to take in our surroundings. Which was a whole lot of fog (and some sheep).

There is a clear path onwards towards Knockmealdown. If in doubt just follow the stone wall. The wall runs the whole way to the peak of Knockmealdown.

We descended for a while after the peak of Sugarloaf and into a small valley between the two peaks. As we walked, we noted a track to our left that leads downwards. We would be taking this path on our return.

Despite the fog, it was easy enough to follow the wall and soon we were ascending again. It was a gradual ascent but tiring nonetheless. At one point, we saw two figures approaching us. As they came out of the fog initially, they looked like giants ahead of us. As we got closer though, we could see they were just two normal women. They told us we were near the top and so on we went.

The peak of Knockmealdown is marked by a Trig Point. This is a small concrete structure which is used in surveying (measuring and recording distances and heights). The fog still hadn’t lifted so we were not able to enjoy any views. We were still in good spirits though and had a nice lunch at the top of the mountain.

We then returned along the path we had come along. The fog was finally beginning to clear so we could take in our surroundings.

We took a right at the point we noted earlier. The other option is to go completely back the way we had come i.e. back over the Sugarloaf.

Our path took us down a steep drop and into the Glenmoylan Valley. This is difficult underfoot with plenty of water and loose rocks to contend with. We didn’t take any of the turns to the left but continue going downhill until we eventually reached a grassy area.

I made my second mistake of the day when we reached the grassy area. I said the old quarry road across the little stream in front of us seemed to be going in the right direction. We decided to cross the stream and follow this quarry road. This was a mistake.

What we should have done was take a left when we got to the grassy area and crossed the fence. This would have brought us to a little pathway with leafy ferns on either side and the stream on your right.

Instead we had the stream on our left. It took a while to realise our mistake. By that point we had to scramble through a forest, over the now wider stream, climb up a bank and push through the ferns to get back to the path. It was a bit of fun though in fairness.

We knew we were on the right track when we came across a sign for “St. Declan’s way”. Take this track and it will lead up to the road at the Vee Hairpin.

Overall (and despite the fog), our Knockmealdown Mountains Hike from the Vee was a thoroughly enjoyable day out. Good company, a testing walk and gorgeous surroundings. What more could you ask for?

Check out my Overview of the Wicklow Way.