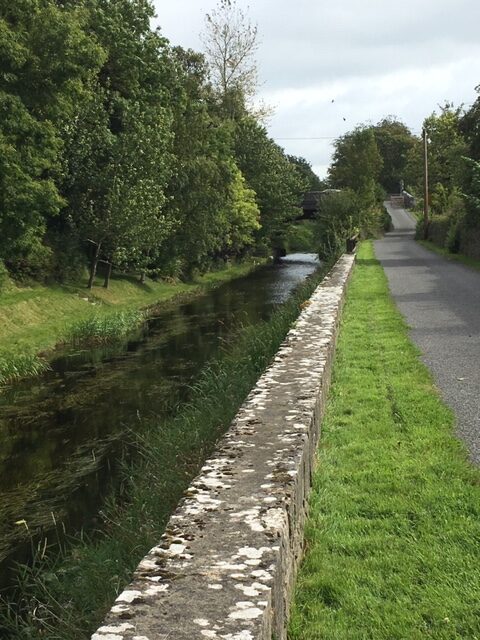 The Royal Canal Way is a waymarked trail that goes from Spencer Dock beside the River Liffey in Dublin to the banks of the Shannon in Cloondara, County Longford.

The total length of the Way is 144km. However it’s a lovely flat walk along grassy paths, gravel and tarmac. Basically following the tow-path along the canal.

Despite being flat, the scenery is still picturesque and there is plenty of wildlife along the canal.

One of the best things about the Royal Canal Way is that the path flows through large and medium sized towns at regular intervals. So there is an abundance of accommodation options along the route. In addition, there are other villages scattered along the way. This allows you to test out the local watering holes.

The Dublin-Sligo train route goes through most of the main towns along the way so there are plenty of public transport options along the Way also.

This was a personal journey for me. I was born and raised in County Westmeath and am a proud Westmeath man. However, because of work and wife commitments, I have recently settled in Dublin. In particular, I’ve bought a house a stone’s throw away from the Royal Canal in Dublin. I did this walk shortly after buying said house. This was my way of saying goodbye to my old home and welcoming life in my new home.

So I walked from door to door. The majority of which was along the canal. I got as far as the close to the longford border and then turned left and walked the last few miles to my parents house.

As this was a celebration of new beginnings, I had one side-mission for the walk. This was to stop in every pub along the Royal Canal Way. To toast the happy times in my old home while on the other hand looking forward to making new memories in my new home.

To sum up, I didn’t complete the full Royal Canal Way. That is to say, I completed 5 days and left out the final one (which is the walk across Longford). I hope this guide will be helpful to those that decide to do some or all of the Royal Canal Way

5 Days on the Royal Canal Way

I completed the walk in August of 2019. The weather was good with the exception of a couple of showers of rain here or there.

The route is effectively all flat. This makes it a nice walk for those not wanting to tackle steep inclines. Or, for someone who wants to stop in a pub every now and then and chat with the locals.

While not as mountainous as the Wicklow Way, it still contains a lot of walking each day. I averaged 26km per day during my walk. So a moderate level of fitness is definitely required.

What side are you on?

The Royal Canal Way swaps between walking on the north or the south side of the canal. It’s well signposted as to what side you need to be on.

Luckily, there is very little of the Royal Canal way where you are walking on roads that are used by cars. Where you are, the roads are very quiet so traffic should not be much of an impact at all. There are some busy roads that will need to be crossed (e.g. a bridge over the canal). Therefore you will need to be careful at these junctions.

Ireland’s official Famine Heritage Trail follows the Royal Canal after starting in Strokestown, Co. Roscommon. As a result, you will see signs along the Royal Canal Way for this trail. The trail starts at the National Famine Museum in Strokestown and subsequently finishes at the Irish Emigration Museum in Dublin. Along the way, there are 30 small monuments of children’s shoes which are cast in bronze.

The Royal Canal Way can be very remote. Despite this, you will still likely see plenty of people walking, jogging and cycling in the stretches of the canal around towns or in the capital. Otherwise, expect to have the route to yourself.

Accommodation on the Royal Canal Way

The beauty of the Royal Canal Way is the wide range of accommodation options along the route. I certainly treated myself and stayed in some really amazing Hotels along the way. This also had the added bonus of incentivising my wife to help out with some of the luggage transfer for my walk. My wife met me at the end of Day 1 in Carton House. When I set off walking the next morning she went to the Spa in Carton House. Then met me later on in the afternoon in Johnstone House in Enfield.

I also stayed in Harry’s Hotel in Kinnegad and was lucky enough to stay with my sister’s house in Mullingar after Day 4. Before spending the final night celebrating the end of the walk in my parent’s house.

Distances of the Royal Canal Way

Royalcanal.ie has a really good distance table for landmarks along the canal (bridges, locks, rivers etc.)

I believe there are a couple of companies that offer to organise self-guided holidays along the Royal Canal Way. They arrange accommodation and luggage transfer on your behalf. To clarify though, I didn’t use these companies so cannot comment on their competence. Or whether they would be willing to solely do luggage transfer and leave you to arrange accommodation yourself.

The other option is to carry everything yourself. This would be tough going given the long distances involved.

I was in the fortunate position whereby I was able to get some help from my wife and also from my sister in relation to dropping off bags for me. As a result, This meant that I was only carrying a day bag with essential supplies with me when I was walking. This really made things a lot easier for me.

Food and drinks along the Royal Canal Way

I chose to bring a packed lunch with me for each day of my walk. It would be possible to stop on some of the days in a pub or restaurant along the Way. However for me, there is just something fantastic about having your lunch out in the open air. It’s great to just stop, relax and take in the nature around you.

My rule for my Wesmino was to stop in every pub along the way for a pint. I’m happy that I more or less accomplished this. There were a couple of notable exceptions but more of that anon.

I had dinners and breakfasts in the accommodation I was staying in. The exception being in Mullingar where I went out in the town for a bite to eat with my sister and parents.

A Taste of Ireland

Overall, the Royal Canal Way is a really pleasant walk and gives you a great flavour of what the real Ireland is like. From the rolling countryside and farmlands that you pass through, to the wildlife, to the people you meet. It’s a lovely walk that, while tiring, it still gives you the opportunity to take the time to enjoy yourself as you go.