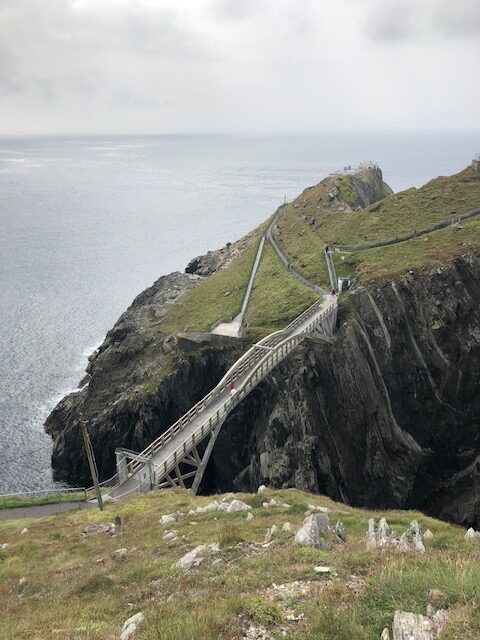 Visiting Mizen Head is a wonderful day-trip. The peninsula is probably most well known as being the most southerly point in Ireland. Indeed, the famed Malin (most northerly point) to Mizen roadtrip is a regular fundraising activity for charities across the country.

In most cases people cycle the route but some crazy individuals even walk the 610km journey. As such, it was no surprise when we saw an official starting point for the mammoth trip painted into the tarmac of the Mizen Head car park.

What Else is There to See when Visiting Mizen Head?

We arrived at Mizen Head having done a bit of research beforehand. I found the official mizenhead.ie website useful. We knew to expect towering cliffs, a spectacular footbridge and an informative visitor centre. Plus a café, shop and toilet facilities for visitors.

The views of the cliffs even from the carpark were pretty spectacular. I had a feeling this was going to be good. Especially to see how the Mizen Cliffs stack up against other cliffs I have visited recently such as the Cliffs of Moher and the Kerry Cliffs.

We found driving to be the easiest way when visiting Mizen Head. Travelling from Bantry took about 50 minutes. We enjoyed the drive but the roads get narrower and windier the closer you get to Mizen Head. Skibbereen is the other large town nearby (about 55 minutes drive). If you’re not driving, bus tours are also available from across the south west region.

We left the visitor centre after purchasing tickets and set off on our way. The route leads directly to the Mizen Bridge and onwards to the tip of Mizen Head itself. Before getting to those must-see attractions, we took a turn to the left and down a mixture of steps and ramps.

A major renovation of the Mizen Head site took place in 2011. The main focus of this was the building of the new bridge. Also included was a number of new viewing platforms. This gives a number of different angles to take in the stunning cliffs.

We got a great view of both the bridge and signal station from the bottom of the steps.

Plus we got up close to the most amazing sea arch.

We headed back up to the main route. Going up the steps was a lot tougher than going down. We found it manageable though. The key is to just take your time. We enjoyed fabulous views of the cliffs any time we needed to stop and take a rest.

The next viewing platform came just before the bridge. This time, up a ramp to the right. This platform gives a fantastic overview of the bridge.

The tip of Mizen Head is just about connected to mainland Ireland through a very thin strip of jagged rock. As such, following a decision to establish a fog signal station on Mizen Head, the original Mizen Head bridge was constructed in 1907 (with the signal station itself established two years later).

The original reinforced concrete bridge was deemed unsafe and closed in 2005. It took 6 years for the old structure to be demolished and replaced with a new concrete and reinforced steel bridge in 2011. Somewhat typically, a lot of this 6 year period was waiting for funding to be granted.

Although the bridge is perched around 150ft over the sea, we felt pretty safe crossing it. I think all that concrete and reinforced steel just makes it feel very secure.

The third and fourth viewing platforms are past the bridge. One up steps and one down a ramp. The higher viewpoint gives a great vista of the Mizen Cliffs as they stretch northwards.

We moved through the Signal Station to get to our ultimate destination. The most southerly point in Ireland! There are some information displays in the Signal Station itself. Then, once outside again, a red signal beacon marks the end of the line. We waited patiently for our turn at the edge of Ireland. Although not overly busy everyone seemed keen to mark reaching this landmark location with a photograph.

We didn’t mind the short wait. The lovely views around us were more than enough to keep us well occupied.

Having got our own photos, we then started to make our way back to the visitor centre. The visitor centre itself has a number of displays. When we visited, these included a history of Mizen Head, information about the life of the lightkeepers, famous shipwrecks, details about the nearby Fastnet Lighthouse, a ship’s bridge simulation plus lots more.

While all interesting, I think the real attraction of Mizen are the cliffs and the Bridge. If you’re interested in the visitor centre stuff, you will enjoy that too. If not, you probably won’t spend too long there. Of course as with any tourist attraction these days, there is also a cafe and shop on site too.

How Much Time do You Need Visiting Mizen Head

We spent about an hour and a half at Mizen Head and felt it was plenty of time. As I mentioned above, you might need longer if you want to spend more time in the visitor centre afterwards.

How Much Does it Cost to Visit Mizen Head?

Entrance to Mizen Head is €7.50 per adult. The fee can only be paid at the Visitor Centre and can’t be booked online.

Is Mizen Head Worth Visiting?

Mizen Head is definitely worth visiting. I would highly recommend it. To get to all the viewing platforms requires a decent level of fitness as there are a lot of steps. Anyone with moderate fitness should be able to manage some aspects of the location though (e.g. the bridge and signal station).

What Else is There to do Nearby when Visiting Mizen Head?

We stopped into the beautiful Barley Cove after visiting Mizen Head. This amazing beach is only a 7 minute drive from the Mizen Head car park.

We had hoped to get lunch at the Barley Cove Beach Hotel. However, when we arrived at around 4pm, the hotel restaurant had stopped serving lunch. The hotel gives vibes of the resort in the film Dirty Dancing to be honest but the beach is superb and well worth a visit.