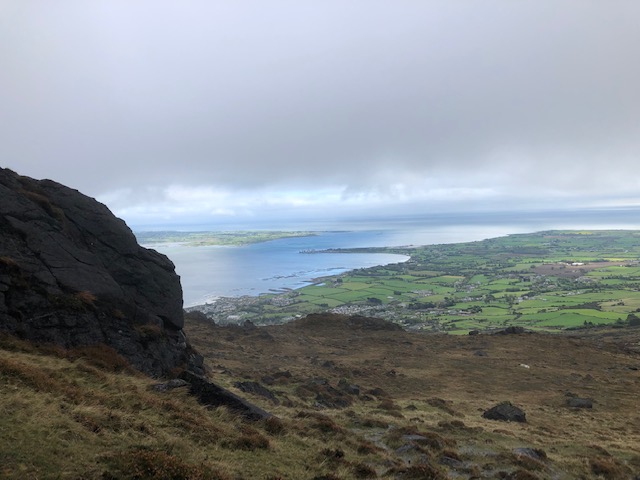 The town of Carlingford sits on the shore of the deep sea inlet known as Carlingford Lough. Carlingford forms part of the Cooley Peninsula with the Cooley Mountains lying to the west of the town and the Mourne Mountains across the Lough to the north.

Slieve Foye is the tallest of the Cooley Mountains and standing at 589m (1,839 ft) towers over the town of Carlingford.

Carlingford is about an hour and a half’s drive from Dublin. On this particular Wild Irish Walks expedition, I was lucky enough to be collected at my door by one of my good friends. Another pal was already in the front seat. We picked up our fourth and final adventurer and set off for Ireland’s smallest county.

We arrived in Carlingford just before 11am on a misty October morning. Threatening clouds had loomed ominously in the distance for most of the drive northwards. Having arrived, I could see that the sun was trying to break through but the Summit of Slieve Foye was still obscured by clouds.

We all put on our rain gear as it looked likely we would see rain at some point of the day (we did).

The Route for Climbing Slieve Foye

One of the nice things about Slieve Foye is that it is so accessible from Carlingford. It was easy enough for us to get parking in Carlingford at the car park beside the tourist information office on the cloudy October morning that we visited. Thousands of tourists flock to the popular town during the summer though so it might not be so easy in peak season.

The route for climbing Slieve Foye from Carlingford is out and back. 5km each way. We planned to follow The Táin Way (a 40km looped walking route around the Cooley Peninsula) for the first 3.5km or so before branching off to summit Slieve Foye. The ever reliable alltrails.com has a good map of the trail.

The good thing about our path initially following the Táin Way, is that our route was marked. We just kept an eye out for the familiar yellow walker signs and we were able to navigate through the town easily enough. Walking past the Church of the Holy Trinity along the Old Church Road before turning left at Dundalk Street. We stayed on Dundalk Street for 400m before turning right on to Rooskey Road.

We continued to follow the yellow walker signs and soon we were leaving the town and on to more country roads.

Already, we were going uphill but the ascent was nice and gradual and we found it easy going. Roughly 1.5km from our starting point of the tourist office in Carlingford, we left the roadways altogether. Initially on rough pathways before shortly moving on to mountain tracks. We encountered two options on leaving the roadway. Both paths meet up again in a short distance but the one to the left gives the most direct route.

Continuing Along The Táin Way

Already, we were much higher than the town and looking back gave lovely views of Carlingford Lough.

We could see Slieve Foye directly ahead of us now. While it looks like a steep path directly to the top, the route actually sweeps left and takes us along a mountain ridge.

The path widened as we walked along the ridge away from Slieve Foye towards Barnevave Mountain.

We approached the end of our time following The Táin Way around the 3.5km mark. We arrived at a crossroads. The Táin Way continued straight ahead of us with a route to Barnevave Mountain to our left and a track to Slieve Foye to our right.

We turned right. And into quite a strong breeze. Added to the breeze was the rain that had been threatening all day. Luckily the rain wasn’t too heavy but the summit of Slieve Foye remained completely obscured by cloud cover.

We walked for another 20 minutes or so before meeting the rocky outcrop that marks the start of the final ascent of Slieve Foye. I found this to be the trickiest part of the hike. While on a normal day everything would have been fine, with such low visibility we found it more difficult to follow the path through the rocks.

The cloud cover meant it was also more difficult to see the trail signs (pink arrows since leaving The Táin Way).

Nevertheless we persevered and made it to the top of Slieve Foye without too much trouble.

It took us about an hour and a half to complete the 5km journey. The wind was really howling at the top so we didn’t hang around there for too long. The cloud cover meant visibility was only around 20 feet so we didn’t have any nice views to delay us.

Instead we took shelter behind one of the many large rock faces slightly further down the mountain and stopped for a quick packed lunch.

As happens so often in Ireland, the weather can change very quickly. As we started to make our way down the mountain, the sun started to break through.

With each step it seemed to get brighter and brighter.

We briefly contemplated going back up to the top to see what the views were actually like. However, what lay in front of us looked spectacular enough to make turning around unnecessary.

The underfoot conditions remained somewhat difficult. The rocks were wet and slippery while everywhere else was muddy. As such, we couldn’t solely look at the wonderful views.

After the rocky section at the peak of Slieve Foye, the path became easier. We followed the grassy pathway with Barnevave straight ahead of us. The route was busier than earlier with many people on the way up (judging the weather way better than us for climbing Slieve Foye).

One man making his way upwards stopped us to point out that the Isle of Man was visible in the distance. We could just about make out a dark shape on the horizon.

We turned left to get back on to The Táin Way and it was easy to just retrace our steps from earlier that morning. The Táin Way looks like an interesting hike in itself. The trail is one of 44 National Waymarked Trails in Ireland. The name comes from the Táin Bó Cúalinge (The Cattle Raid of Cooley) which tells the tale of Queen Méabh of Connaught’s battle against the legendary Cú Chulainn for the famous brown bull of Cooley.

We found the small section around Carlingford and Slieve Foye really enjoyable. I’m sure the rest of the 40km through the Cooley Mountains would be great. For now, we had to make do with what was in front of us. Which wasn’t too bad in fairness!

Back to Carlingford After Climbing Slieve Foye

If you have the time and energy after the 10km hike, a stroll through the town of Carlingford is recommended. It’s a pretty little town that caters to tourists with plenty of shops, bars and restaurants. We stopped for a well deserved ice-cream before making the drive back to Dublin. It was a good way to top off a great day climbing Slieve Foye from Carlingford.