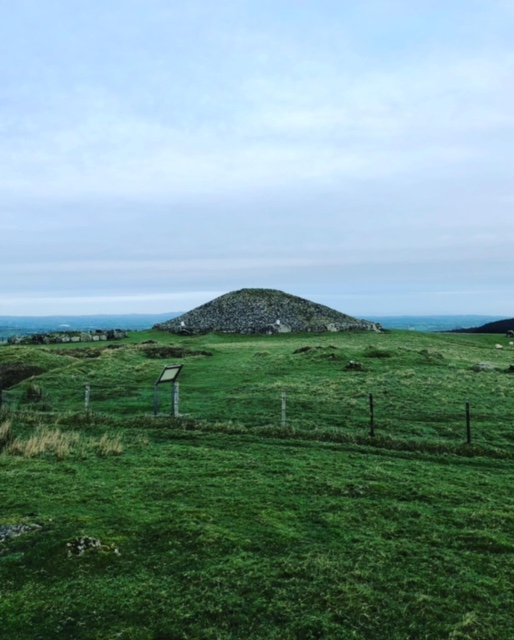 Sometimes life gives us wonderful little surprises. The 2km Loughcrew walk is definitely one of these. The Loughcrew walk is located about 10 minutes drive from the town of Oldcastle in County Meath. I say it’s a surprise because I had never really heard of Loughcrew until recently.

That was up until one of my best friends married a girl from Oldcastle and I travelled to the town for the wedding. Loughcrew is well advertised on the drive to Oldcastle and I made a note to come back and check it out.

I discovered there are a number of tourist attractions that can be grouped together under one general Loughcrew banner.

For me the main items of interest are the Loughcrew Passage Tombs that sit atop a range of 4 hills known as Slieve na Calliagh* (or “The Mountains of the Witch” in English). The individual names for the four hills are Carnbane West, Carrickbrack, Carnbane East and Patrickstown Hill.

The Loughcrew Walk is essentially the climbing of Carnbane West which hosts the largest of the neolithic structures in Loughcrew. Rather unimaginatively known as Cairn T. Cairn T and the surrounding stone structures were built in c. 3000 BC. Cairn T also marks the highest point of Slieve na Calliagh at 276m.

You can stroll about 5 minutes down the road from the Loughcrew Walk car park to the Loughcrew Megalithic Centre. The centre provides accommodation as well as tours of the passage tombs and information on the local area.

The 17th century Loughcrew Estate House and Gardens which is the birthplace of Saint Oliver Plunkett is also nearby. The entrance fee is €7 and there is a coffee shop on site too. Saint Oliver Plunkett was an Irish Bishop executed in London whose head is now on display in St. Peter’s Church in Drogheda.

If you are spending the day in the area, I would also recommend visiting the beautiful Mullaghmeen Forest in nearby County Westmeath. It takes about a 15 minute drive to get there from Loughcrew.

Getting to The Loughcrew Walk

I made the 1hr and 15 minute drive to Loughcrew from Dublin on a fresh December morning. I found plenty of space in the medium-sized roadside car park. Although I presume it is busier during the summer.

Walking from the car park to Cairn T is fairly straightforward and only around a kilometre in distance. Although steep in a couple of places, the Loughcrew Walk should be comfortable for anyone with even a moderate level of fitness.

From the car park, I walked straight up a set of steps then turned right along a short gravel path and through a metal gate. After that, I was out on to green grass and on to the hill itself.

The route to the top is very easy to follow in that the path is quite worn from use. In addition, there are regular markers every 30-40 metres. So I simply had to follow these markers as I made my way up the hill.

As I ascended, I could make out more clearly two of the other peaks in the Slieve na Calliagh range (Carrickbrack and Carnbane East). The fourth and final hill (Patrickstown Hill) is on the eastern side.

I noticed a couple of nice benches along the route for people to stop and take in the views. Which is a nice touch.

The final ascent to the passage tombs that mark the top of the hill is the steepest but it didn’t take me too long to complete.

I made my way through a metal gate at the corner of the boundary fence that surrounds the stone tombs at the top of the hill.

While it only takes about 15 minutes or so to walk up to the top of the hill, you need to allow yourself plenty of time to explore once you get up there. Loughcrew contains a treasure trove of historic structures. The fact that it’s just sitting on top of a secluded hill in rural county Meath is what really makes this walk such a lovely surprise.

Cairn T is 35m in diameter and dominates the summit. While previously it was possible to organise access to the interior of Cairn T, at the time of writing, getting access inside the passage tomb was not possible due to ongoing conservation works.

Similar to nearby Newgrange, Cairn T is also aligned to the sun’s movements. While Newgrange is a winter solstice tomb, Cairn T is an equinox tomb. This means on both the Spring and Autumn Equinoxes (21st March and 23rd September respectively) the dawn rays of the sun enter the passage and illuminate the back stone perfectly.

The back stone of Cairn T and other large stones at the entrance to Cairn T are the most obvious examples of rock art on the site. However, I was able to locate another few carvings on the surrounding stone structures also. I found it pretty amazing to stand in this special place. I was touching artwork that was created more than 5,000 years ago. What a crazy experience.

Mountains of the Witch

As mentioned above, Slieve na Calliagh translates as Mountains of the Witch. The name refers to the old legend that an evil witch, while attempting to become mistress of all of Ireland, had to complete feats of strength to prove her worth.

One of these was to fly from hill to hill carrying a huge bag of stones. Some of these stones dropped and formed the cairns that make up Loughcrew today. Unfortunately, things didn’t turn out well for the witch. She succumbed to the weight of the stones and broke her back on the fall. The poor witch is buried under the stones that fell with her at Loughcrew.

The Witches Chair still sits at the north side of Cairn T where people can sit and mull over her untimely demise. Perhaps to ponder on the dangers of the pursuit of power.

The Return Journey of My Loughcrew Walk

I took in the views to the east and towards Patrickstown Hill before returning to the car park. It’s a short 1km stroll back. I left the hill in amazement over the fantastic history sitting there waiting for people to explore. A wonderful little surprise indeed!

*Maps and online resources use the term Slieve Na Calliagh extensively when referring to this range of hills. I note that while the use of Sliabh na Callaithe is less widespread, it is probably the more correct Irish spelling.