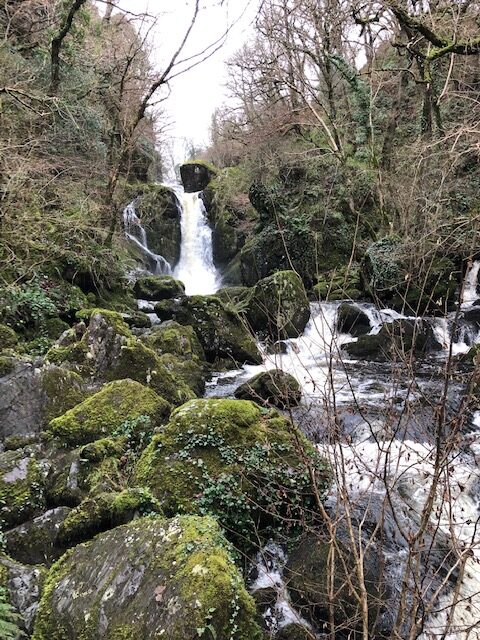 The Devil’s Glen Walks are located about 10 minutes drive from the village of Ashford. Ashford sits just off the M11 and as such makes it easily accessible from Dublin. Devil’s Glen offers two trails for walkers; the 5km Waterfall Walk and the 4km Seamus Heaney Walk.

Both routes meet at the main car park so it is possible to complete them one after the other. Which is exactly what we did on a fresh Saturday afternoon at the start of January.

Getting to the Devil’s Glen Walks

As mentioned above, Devil’s Glen is close to Ashford. I’ve included a link to the google maps location of the main car park. It is also possible to park at the smaller car park at the entrance to Devil’s Glen.

The car park was moderately full when we arrived just after midday on a Saturday afternoon in January. I imagine it gets much busier in the Summer months. The Coillte website notes that the main car park is only open from 9am to 5pm daily.

The Devil’s Glen is a large forest dissected by the Vartry River. The fast flowing water forms a deep gorge with an impressive waterfall cascading into the valley.

Local legend has it that this area was actually once a peaceful area of rolling countryside. A powerful chieftain had a beautiful daughter called Flora. Flora was famous not only for her beauty but also for her high standards. To the dismay of many a young prince, Flora refused their offers of marriage. One day, a handsome stranger arrived in Wicklow. He wore fine clothes and his servants drove horses laden with gold and jewels. Flora again refused the marriage offer from this handsome stranger.

The stranger flew into a rage and jumped down from his horse. Only then did people notice his cloven feet. It was the devil! In a fit of rage, he tore up the nearby land. Scattering rocks and soil and forming the rugged topography of the modern day Glen.

Forever more, the area was known as the Devil’s Glen. The thunderous sound of the waterfall remains a reminder to locals of the satanic power that changed the Glen.

Others might argue that the valley was actually formed by melting ice at the end of the last Ice Age. Whichever is the truth, one thing is for certain, a stunning landscape for walkers is the end result.

As noted above, there are two marked trails to choose from in Devil’s Glen. Unsurprisingly, the Waterfall Walk is the more enjoyable of the two. It’s hard to beat a waterfall in fairness. So, if you’re stuck for time, I would definitely recommend the Waterfall Walk.

Alltrails.com has a good map of the Waterfall Walk.

After parking up the car, we set off on the Waterfall Walk. We followed the earthen trail through the forest. The first thing we noticed was the giant Chrysalis sculpture by Irish artist Michael Quane.

The Devil’s Glen was chosen by Coillte in the late nineties/early noughties as the location for “Sculptures in Woodland”; an initiative to install art pieces in the forest. Many of the original sculptures still remain and add a nice touch to the already pretty woodland surroundings.

We found the trickiest part of the walk was making the quick descent from the upper part of the valley to the river Vartry. It’s quite steep so we just needed to be careful as we made our way downhill.

We heard the river before we saw it. As such, there was a keen sense of anticipation building. Finally, we caught our first glimpse!

The River Vartry rises near the Great Sugarloaf Mountain in north Wicklow. It feeds a Dublin City Council reservoir before reaching Devil’s Glen. From there, the river flows through Ashford and on to Broad Lough near Wicklow Town.

The Waterfall Walk trail follows the River Vartry for c. 2km. The river is gentle and peaceful in places while at other times quite turbulent as it flows through different series of little rapids.

We navigated the riverside path with relative ease. While we encountered some patches that were very mucky, in general the path was in good condition despite the recent heavy winter rains.

One of the great things about walking alongside rivers is that it appeals to lots of the senses. We took in the beauty of the valley while at the same time fully aware of the background sounds of lovely flowing water.

The trail got busier as we approached the waterfall at around the 2.5km walk. Some people take the more direct upper route if they just want to take in the waterfall.

Like the river, we could hear the waterfall before we could see it. You need to climb up to a small viewing platform to get a full view. A little queue had formed and we waited our turn. The waterfall is impressive and really enjoyable to view such natural power up close.

We doubled back along the path we had come by for a short period. Then we came to a fork in the path and turned right, uphill and away from the river for the first time in an age.

The path rises quickly and soon we are high above the river. It’s good to get a different perspective of the valley.

The trail runs along the top of the valley for about 2kms before bringing us back to the car park.

We took advantage of the picnic benches at the car park after getting our food supplies from the car park. After a quick bite to eat we were refreshed and ready to go. Time to take on the next leg of the Devil’s Glen Walks.

Seamus Heaney and his family lived in the gate lodge of nearby Glanmire Castle for a period in the 1970’s. It is said that some of the late great poet’s finest work was inspired by his walks and meditations in this area. Heaney spoke about the “strange loneliness” of the Devil’s Glen. Something for you to contemplate on your Devil’s Glen walks.

Heaney had a holiday home in the area later in his life and made a rare guest appearance at the official launch of this route in 2007.

This 4km looped walk is pretty easy. There are some sections of uphill walking but these should be manageable for most people.

Again, Alltrails.com has a good map of the looped walk (albeit we started our Seamus Heaney Walk from the main car park rather than the roadside carpark).

We walked back out the roadway for a short period before turning right and into the forest (keep an eye out for the yellow markers).

The yellow markers aren’t always easy to see. Shortly before the 1km mark, we arrived at a gravel road and it wasn’t clear whether to go left or right. A quick glance at our map made it clear enough that we should be going left. Reassuringly, a few minutes later we came across a yellow marker on the side of the road.

We followed the gravel roadway until around the 2km mark where we turned left again. This time back on to the forest pathways.

At roughly the 3km mark, there is a nice opportunity to get some great views of the surrounding countryside. The route brings you to the edge of the forest and there is a nice rocky platform to take in the lovely imagery.

Soon after, we were back to the access road and we followed it back to the main car park.

All in all the Devil’s Glen Walks are lovely tranquil routes through very scenic forestry. My favourite section was following the river along the bottom of the valley. And of course the fantastic Devil’s Glen Waterfall.