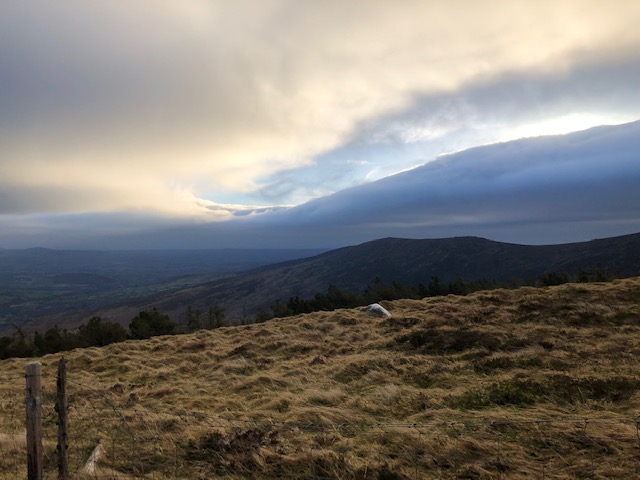 Mount Leinster is on the border between counties Carlow and Wexford. Standing at 795m, Mount Leinster is the highest peak in both. The most common way to reach the summit is along the well maintained access road from the car park located at the Nine Stones. In my view however, the Mount Leinster Loop Walk detailed below is a much nicer way to climb the mountain.

I have uploaded a map of the route to alltrails. The loop is 8.4km in total. While not the longest of distances, the route is steep in places and a good level of fitness is required to complete it.

The Mount Leinster Loop walk goes past the main car park at Nine Stones. As such, it is possible to start the walk from there. I chose instead to park about 2km further up the road. There is an entrance to some forestry land there where it is possible for 3 or 4 cars to park without obstructing the gateway. This meant I could start straight on to the mountain and leave the road walking until the end of the loop.

I arrived at the starting point at just before 9a.m. on a cold January morning. Thankfully the weather was dry. I had hoped to arrive earlier to catch more of the sunrise but the morning ran away from me a bit. Nonetheless, I still managed to get the last of the beautiful colours of the fading dawn.

I set off in good spirits. I had just made contact with my Sister who lives nearby in Wexford. We made arrangements for me to call to visit her and her family after my hike. I find it is always nice to combine a hiking trip down the country with such visits. It’s a great way to make the most of the long drive. The most recent previous example of using Wexford as a south eastern base was when I tackled the beautiful Knockmealdowns Mountains in neighbouring County Waterford.

The Mount Leinster Loop walk starts out very steeply. Although it knocked the breath out of me a little, it didn’t dampen my mood. It had been a while since I’d been out on the mountains. The most recent hike I’d completed was in Devil’s Glen in Wicklow. While it is a beautiful woodland walk with a stunning waterfall, there is just something slightly exhilarating about being out on the open mountains.

Perhaps adding to the positive vibes were the simply stunning views. Every time I stopped to take a breather, I turned around to see the amazing vista of the valley spread out below me.

The path is easy to follow and thankfully the incline reduces considerably as it sweeps around to the right. The path essentially follows the outline of the forest, which should be on your left hand side. This is good information to know as the gravel path falls away as you move upwards. I completed this walk in winter and even then the terrain underfoot remained manageable.

The woods provided me with valuable shelter as I moved upwards. When this cover ended, I was a lot more exposed to the elements and glad of my many layers. After about 1.75km. The path turns to the left. The route follows a wire fence. Again, this should be on your left hand side.

I experienced a bit of concern about my chosen route as I followed the fence. I could see clouds obscuring the top of Mount Leinster in front of me. Now however, directly ahead of me was another wire fence blocking my path. This wasn’t something I was expecting. Luckily, as I made my way nearer to this fence, I spotted a little gap to pass through. This was a big relief!

There’s a rough track to follow after passing through the fence. Ultimately the track meets up with the access road leading up the summit of the mountain. The further I moved along the track, the clearer the road became in front of me. I reached the access road after about 2.5km (and 45 minutes or so) of walking.

The tarmacked access road is well maintained and runs the entire way to the television mast at the top of the mountain. As such, there is not much tips and advice needed to get to the summit. I needed to walk about another one kilometre to get to the top.

My original plan was to stop at the top of the Mount Leinster Loop walk and have the flask of tea and chocolate that I had brought with me. But with clouds covering the peak, I decided it would be more worthwhile to take my break on the way up.

Luckily for me, I found a lovely rock to take my rest. That is to say, it proved very comfortable as I enjoyed my tea and took in the views.

Feeling refreshed, I made the final journey upwards. However, with the cloud cover, visibility soon became very limited. I made my way to the trig point/stone cairn marking the summit and quickly turned around for the return journey. I didn’t see much point in hanging around.

Going Down the Mountain

For the descent, I followed the access road all the way down to the car park at the Nine Stones. It was shortly after 10a.m. at this stage and the roadway got steadily busier the further I progressed.

I noticed a lot of young families making their way uphill. As a result of the access road, Mount Leinster is hugely accessible and a child friendly walk. It makes it a lot easier to get up to a relatively large height without too much discomfort. Everyone seemed to be enjoying their walks and the fabulous views of the Carlow countryside. I certainly was as I made my way downhill.

The Nine Stones is a viewing platform below Mount Leinster along the L3005 roadway. The name comes from (unsurprising) a row of 9 small stones jutting out of the ground at the edge of the roadway. The stones are reputed to represent 9 shepherds that lost their lives here during a winter storm in years gone past.

In addition, there is a medium sized car park here which is mainly used by those people I met climbing the mountain or others just taking in the views from here.

The views certainly are lovely and I drank them in as I make my way back to where I parked my car a couple of kilometres further along the L3005.

This section of road is actually part of the South Leinster Way, a 104km National Waymarked trail from Kildavin in Carlow to Carrick-on-Suir in Tipperary. If you’re interested in finding out more about Ireland’s National Waymarked Trails, I’ve previously written an article on this topic.

The final couple of kilometres were nice and flat and felt like a soothing end to a very enjoyable walk. I’ve spent just over 2 hours completing the 8.4km Mount Leinster Loop walk. Certainly, It’s one I would definitely recommend.