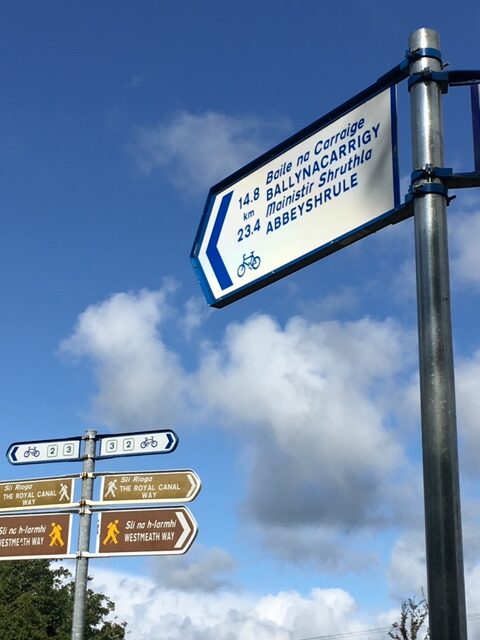 I recently wrote an article about some of my own rules of hiking. One of the top guidelines that I noted down was to always “stop for a pint”. While this says a lot about my own personal fondness for the black stuff, there was also something deeper there. Hiking is not about getting from A to B in the quickest time possible. It’s about nature, wildlife, friendship, wonder… Basically an enjoyment of your surroundings….this can also be done by taking a break and doing something nice for yourself. Such as stopping for a nice drink to quench the thirst you’ve built up while walking. As such, I have put together a list of all of the pubs of the Royal Canal. Which altogether make up a pretty epic pub crawl.

The Royal Canal Way fits perfectly into this perspective. It’s a long walk. At 146km, it’s the ninth longest of Ireland’s 44 way marked trails. However, because it follows the canal, it’s extremely flat so it is possible to tackle the route at a nice easy going pace. Plus, as the route winds through various towns and villages, there are plenty of opportunities to stop into some of the local bars.

In all, there are 23 pubs in all along the canal. I have personally been in 20 of these fine establishments. Which again, is a bit a reflection on me (good or bad I wonder?). All of the below are within 200m of the banks of the canal. In fact most of them actually overlook the waterway.

Mainly catering for the 82,000 capacity stadium across the road. The bar in this hotel will be packed on match days. It’s much more sedate for the remainder of the time.

Also guaranteed to be busy when matches are taking place in nearby Croke Park. They have a large lounge area in the back to cater for this. Otherwise, it’s a typical old school Dublin pub serving pints of plain to the locals who will congregate in the front bar.

Three pubs dotted around the junction at Cross Guns Bridge in Phibsboro. The Bernard Shaw is a hipster spot serving craft beers, nice food and good coffee. It’s also got a lovely beer garden out the back. Across the road is The Brian Boru. One of the 3 pubs I haven’t had the pleasure of stopping into (yet). Finally on the other side of the canal is the The Bald Eagle offering good food and drink options.

The pubs start to spread out a bit more now. Next up and 4km further along the tow-path is The Lock Keeper. Formerly known as The Canal Bar. It’s a modern pub which caters for the newly built apartment blocks in Rathborne. Offers typical pub food menu also.

The last Dublin pub along the canal. This boutique hotel is probably better known for its bar and restaurant. There is a spacious beer garden here which always gathers a crowd on nice summer days. The row of colourful barges moored alongside the hotel always look great here too.

There were 7 pubs on the first 10km of the Royal Canal Way. Amazingly, you have to travel over 22km further to find the next bar. In saying that, there are other places you could stop if you wanted to go a bit further off the canal banks. The main street in Maynooth being a perfect example of this with many options a few hundred metres stroll off the designated track.

Thomas O’Keeffes is a nice quiet bar offering both food and drinks.

The second of the Royal Canal Way pubs I have yet to visit.

The first proper country pub to be encountered. Fureys serves food Monday to Friday and nice Guinness seven days a week! It’s almost impossible to pass by this place without stopping in.

You know you’re deep in the countryside when the local pub also operates as a shop and post office. Nice spot here with wooden benches outside overlooking the canal if you’re lucky enough to stop when the sun is shining.

The first of 10 Westmeath pubs along the banks of the canal. Nanny Quinns is a lovely friendly pub which also offers food.

This is a bit of a mad spot. Very friendly and a nice pint of Guinness. Also operates as a shop.

There are three watering holes in close proximity to the canal in Mullingar. The first is the Bridge House which is a lively pub with a good food menu. On the other side of town you have Clarkes which is always busy and offers a lovely pint of stout. Finally, there is the Newbury Hotel which is another good option if you are looking for grub.

There are seven Dublin pubs on the banks of the Royal Canal. Ballynacargy with a population of 277 has 4 pubs. All are within the village. The Wagon Wheel is probably my favourite as it has one of the best pints of Guinness you are ever likely to taste. Murtaghs usually has a good open fire going so it is a good stop off on a cold day.

Abbeyshrule is a small village that offers a lot. It has won the national Tidy Towns competition and also is a gold medal winner at the European Entente Florale Competition. Attractions include the ruins of a Cistercian Abbey, an aqueduct, an airfield and the sweeping river Inny running through it. So, it’s appropriate that the watering hole in this village offers a lot too. It’s a snug little country bar, fantastic restaurant and large function hall all wrapped under one roof. They all sit well together so it’s a real treat to stop in here for a pint.

The longest stretch you’ll go without a pub beside you on the canal. However, if required there are options not far off the waterway in Ballymahon, Foigha, Kenagh and Killashee.

Finally, a word of warning. Obviously these bars are along the waters edge. Be careful you don’t overdo it and end up with soggy hiking boots!