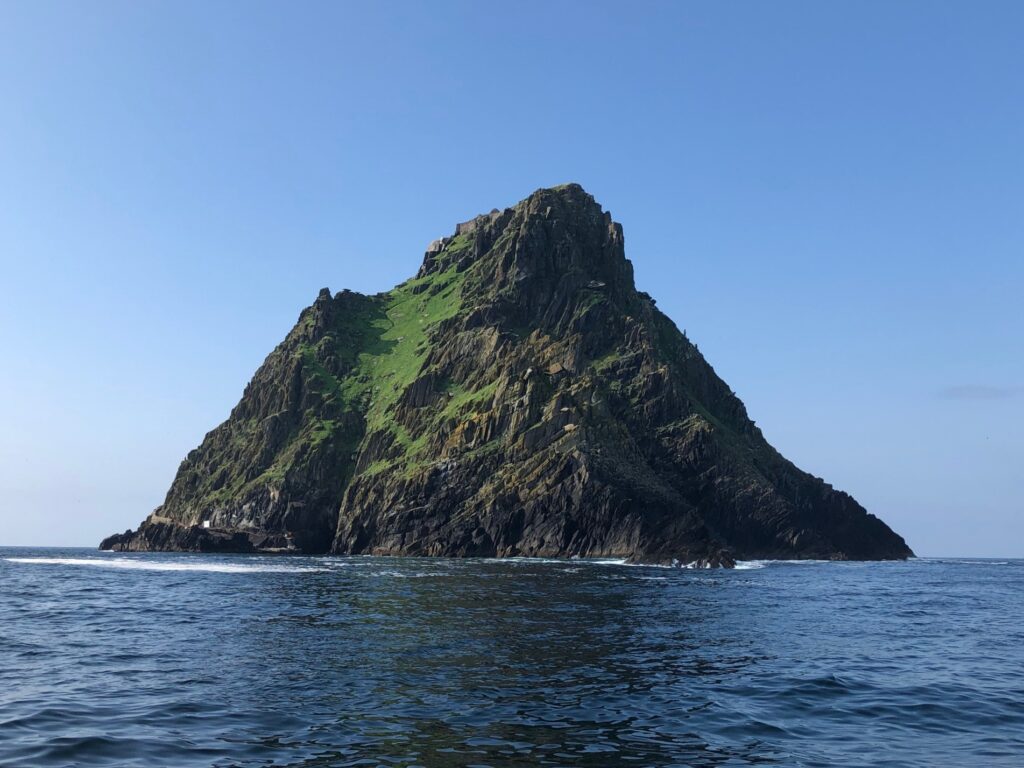 Skellig Michael is classified as a UNESCO World Heritage Site. One of only 3 sites in Ireland with this designation. The others being Newgrange and the Giant’s Causeway. It’s pretty easy to see why Skellig Michael keeps such illustrious company. In a word, the island is spectacular. Visiting Skellig Michael is a must.

Visiting Skellig Michael had been on our wish list of places to visit for pretty much as long as I can remember. We finally got to complete the trip at the end of August in 2021.

Skellig Michael is one of two islands that form the Skellig Islands. The other island being Little Skellig (or Skellig Beag). I say islands but these are in reality giant rocks rising vertically from the ocean and soaring to heights of 520ft and 440ft respectively.

Apart from the natural beauty, what makes visiting Skellig Michael even more impressive is that a group of monks set up a monastery on this rocky outcrop 12km from the Irish coastline in the 6th century. Monks continued to inhabit the island up until the 13th century. The remains of the monastic settlement remain (relatively intact) on Skellig Michael to this day. We walked the 618 steep and tricky steps to get the settlement near the summit of the island. It was worth every step. Simply Amazing!

How to Get to Skellig Michael?

Notionally it is free to enter Skellig Michael. However, you need to pay a licensed tour operator to ferry you over. There are 15 licensed boats allowed to bring tourists to the Island. I’ve provided a list below of many of these (as of the time of writing).

Booking well in advance is strongly encouraged as demand for landing trips to Skellig Michael is extremely high. Indeed, the number of people wishing to visit the island has expanded even further over the past few years ever since Skellig Michael appeared as a location in the Star Wars films (The Force Awakens and The Last Jedi).

If demand for tickets is one obstacle for fulfilling your ambition of visiting Skellig Michael; there is also one other problem. The weather. Boat trips can be cancelled if weather conditions do not allow safe crossing to the islands. The Office of Public Works (OPW) manage and maintain the islands. They decide on what companies receive licenses to land on the island with tourists. The OPW also make the decision on whether it is safe for these landings. Conditions on Skellig Michael can often be different from the mainland due to its exposure to the elements.

One interesting fact from skelligmichael.com is that during the Summer landing season, boats only get to land about 65% – 70% of the time.

So for many people, their planned trip can be cancelled at very short notice. While this is obviously very disappointing, some consolation can be taken from the many other tourist attractions in the area (such as The Kerry Cliffs).

Departure times are normally between 8.30am and 9.30 but can be earlier or later depending on landing slot times issued by the OPW. We paid €125 per person with Skellig Michael cruises plus a €10 booking fee. All other operators seem to be around the same price range though it may be possible to get a slightly cheaper price by shopping around.

I’m usually early for everything and the trip to Skellig Michael started off along those lines. We were the first ones to board the boat. The boat itself measures about 30 feet in length with passenger seating at an open deck section at the back of the vessel.

To be honest, I was a little worried about the trip over to Skellig Michael. Any time I sail anywhere with my wife, I can’t help but think of the old superstition to never get on a boat with a redheaded woman.

My fears increased steadily as each couple that boarded the boat after us seemed to contain a red headed female. In all, of the 8 passengers and 2 crew (Rachel and Hugh), we had 3 red haired women on board!

Any fears proved unfounded and the trip to Skellig Michael was nice and calm (as an aside, the Independent has a nice article to other seafaring superstitions).

Any worries we had in relation to weather conditions and accessing the island were allayed as soon as we got up that morning. The sea was calm and the skies were blue. A perfect day to visit Skellig Michael. As we sauntered out to sea, we took in the lovely views back over Valentia Island and the Iveragh Peninsula behind us. We even saw a pod of dolphins on the way over. So keep your eyes peeled on the trip.

Visiting Skellig Michael means travelling past Little Skellig. Little Skellig is home to the largest colony of Northern Gannets in Ireland. Access to Little Skellig is not permitted. Our boat tour sailed us around the island so it was great to get as close of possible to this giant Gannet colony.

Circling Little Skellig offers some pretty spectacular views in itself. My favourites were those where you could see Skellig Michael shimmering temptingly in the background. The below image is an example of this. The rock formation is fittingly known as the “Elephant Trunk”.

Soon we were on our final stretch. The last 1km of ocean before we reached Skellig Michael. From the back of the boat, we took in the lovely image of Little Skellig with the Irish coast in the background.

The northern lighthouse no longer stands, however the road hewn into the rock between the lighthouses is still in place. The pathway plays a critical function allowing tourists to visit the island as it connects the landing jetty to the most accessible set of steps up to the monastery.

Our boat pulled up to the pier and we needed to jump from the boat on to the stone structure as our little craft bobbed up and down on the water. It’s easy to see how this would be difficult in more adverse weather conditions. We again counted ourselves lucky that we were visiting Skellig Michael on such a glorious day.

We followed the pathway past the helicopter pad and basic toilet facilities (a new addition) and on to the base of the steps that would bring us upwards to the monastic site.

Here, we needed to listen to a health and safety talk from one of the OPW workers on the island. Visitors are not allowed ascend the steps without first completing this safety briefing. The talk only took about 5 minutes. I could feel a keen sense of anticipation among the group of 20-30 people as we listened. Soon we would be making our way up the steps!

One of the main pieces of advice given was in relation to the 618 steps we needed to take to reach the monastery. The steps are steep in some places and uneven in other places. Caution is needed in all places. The seemingly vertical drops can be quite scary!

Going down the steps is actually the more difficult part. Some people choose to sit and scooch down each step for some of the more intricate sections. This is fine and perfectly usual and acceptable when visiting Skellig Michael.

Not too far into the climb, Star Wars fans will recognise the Wailing Woman Rock which features in the The Last Jedi Film. Rey destroys the rock with her lightsabre in the movie but it miraculously still stands in real life.

After climbing the steps, we finally reached the settlement at the top of the north peak of the island. We entered through the terraced gardens. Upper and lower gardens exist with the remains of a number of other buildings also.

These include the famous Beehive Huts where the monks slept, St. Michael’s Church, a large and small Oratory, an alter and a cemetery. In addition, the remains of the drainage systems and water cisterns used by the monks are also visible.

There is a beautiful feeling of serenity and tranquillity around the settlement. With the numbers of visitors capped by the amount of boats landing, it never felt overly busy (in fact, a limit of 180 visitors per day is in place on the island).

OPW tour guides give an information talk every hour or so explaining the history of the island. We found this very informative. The guides certainly know how to communicate their knowledge in a light and easy manner. For the rest of our time there, we strolled around at our own leisure, exploring the buildings and taking in the views. We sat and ate our packed lunch in one of the small terraced gardens. The views were amazing and it certainly was a memorable meal.

Time seemed to fly by and soon we took our last glances before setting off towards the steps. This time going down and back to the boat.

The slow walk downwards gave us a good view of the south peak of the island. Amazingly, some of the monks didn’t think the North Peak of Skellig Michael was isolated enough. As a result, they sought out something even more extreme. The result is the Hermitage on the south peak where lone monks would retreat to in order to try to get closer to God. The Hermitage is too dangerous to allow tourists access.

When to Visit Skellig Michael?

Our slow and steady pace down the steps eventually got us back to the access road. From there we strolled back towards the waiting boat. All in all, it was an amazing experience visiting Skellig Michael.

The only advice I would give is to try and book a trip before the Puffins migrate from the island. The Puffins arrive on Skellig Michael in late April and stay until early August. We had just missed them as our visit was at the end of August.

Landing Season for tourists is generally from mid May until the end of September. Although this can vary from year to year and is at the discretion of the OPW.

As mentioned above, visiting Skellig Michael is subject to the weather and also the huge volume of demand to visit the islands. The impressive skelligmichael.com offers an in depth guide on how to go about booking a tour. As with a lot of these things, sometimes you do need a bit of luck…..may the force be with you.