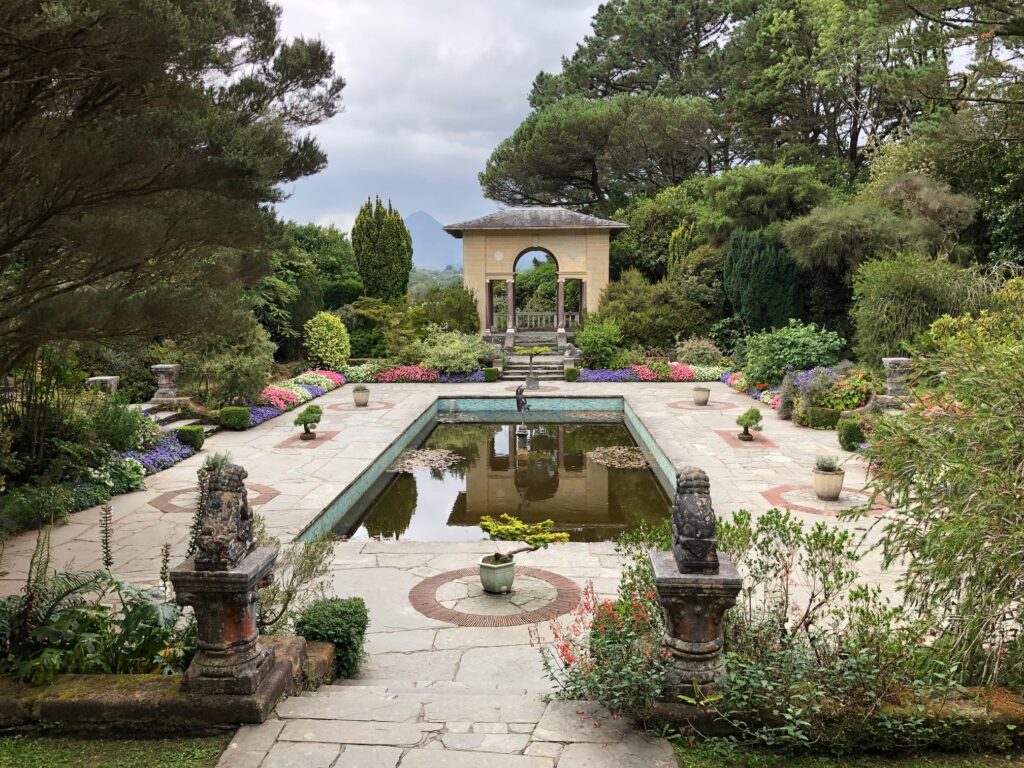 Garinish Island (also known as Ilnacullin) is a 37 acre garden island located in Bantry Bay off the coast of Cork in the south west of Ireland. I never knew garden islands existed before visiting Garinish in September 2021. It’s pretty much exactly what it says on the tin, an island that has been designed and sculpted into a garden. In this case, a most amazing garden.

One of the reasons for the beauty of Garinish is that the island enjoys its own micro climate. All thanks to the sheltered nature of the bay and the warming gulf stream. As such, the gardens are really beautiful and a pleasure to wander through.

Our visit took place during Covid restrictions. In reality, this meant that a one way walking system was in place around the island. We didn’t feel this impacted much on our enjoyment. In fact, we felt it resulted in a more structured way of seeing all that Garinish Island has to offer.

Harald Peto, a famed english landscape architect, designed the gardens for the Bryce family who purchased the island in 1910.

The Bryce family planned to build a mansion on the island for them to reside in. The family’s financial difficulties following the First World War scuppered these plans somewhat. Instead, following the death of John Annan Bryce in 1923 (and the subsequent sale of his London home), his widow, Violet moved full time to Ireland to live in the Gardener’s Cottage. The Bryces built the cottage in 1912.

After Violet’s death in 1939, her son Rupert extended the house to more or less what it looks like today. The residence is known as Bryce House. Previously, visitors to the island could avail of guided tours of the house however this was not available during our visit (possibly as a result of Covid).

How to get to Garinish Island?

Unsurprisingly the only way to get to Garinish Island is by boat. Two ferry operators offer this service to tourists. Check out the Harbour Queen and Blue Pool Ferry websites which give information on ferry times and allows you to book online.

Garinish Island is only open to the public from the months of May to October.

The Ferry companies depart from slightly different locations in Glengariff, County Cork. The Blue Pool ferry company is located in the centre of Glengariff town (with a short walk from there down to the waterfront) while the Harbour Queen departs from the main pier in Glengariff.

While booking in advance is advisable, we didn’t do this and had no issues in getting a place on the next available Harbour Queen ferry after parking up at Glengariff Pier.

Our reason for not booking in advance was that we had originally planned to visit Dursey Island on this day. However maintenance to the cable car meant this wouldn’t be possible. Unfortunately, we didn’t realise the cable car was out of operation until we arrived at it. Not the best start to the day!

After some consideration, we decided that a meditative stroll around the gardens at Garinish might be the best tonic to our mislaid plans. As a result of all the confusion, we only arrived at the pier shortly after 2pm.

The Boat Trip and Seal Island

We paid at the pier (€14 per person) and soon set sail. The boat was relatively empty with only 5 or 6 others along with us in the 50 or so available seats. We figured this was due to the off peak time of our visit (a Thursday afternoon in early September). The crossings get much busier at weekends and especially in sunny weather.

It took 15 minutes to get over to Garinish itself. We enjoyed the nice views of Bantry Bay as we crossed taking in Glengariff Castle and Maureen O’Hara’s house. The highlight of course was when we slowed as we passed Seal Island. The colony is estimated to have up to 250 seals in residence!

On arrival in Garinish Island, we followed the one way system in operation due to Covid. The first point of interest on our tour was the Italian Garden.

The Italian Garden is also known as the sunken garden. It contains a beautifully ornate pool. Standing at one end of the pool is a pretty garden tea house known as the “Casita”. The view from the Casita extends over the pool to the pavilion at the other side. Beyond the pavilion, known as the “Medici House”, are wonderful views of the Caha Mountains. I could just see the outline of the Sugarloaf on our visit.

We noticed a lovely manicured lawn behind the Casita. We didn’t linger for long though. Our path brought us elsewhere. Onwards towards the Temple.

The Grecian Temple is a roofless rotunda allowing more stunning views out over the Caha Mountains. We stopped here to have our packed lunch. Luckily, we enjoyed the meal in wonderful solitude. Just ourselves and the beautiful surroundings.

Next, we moved along the walkway between the Grecian Temple and the Martello Tower located on Garinish. This section is known as the Happy Valley. Here lies an extensive collection of plants and trees from all over the world. The micro climate of Garinish allowing the growth of such plants to be possible.

The Martello Tower system is a series of coastal forts built by the British in Ireland during the 19th century. The Martello on Garinish dates back to 1805.

The British built about 50 Martello Towers in Ireland. I’ve come across others in my wanderings around the country such as the one described in Dalkey encountered on my Killiney Hill Walk.

From the Martello Tower, the path took us back to the Walled Garden near the ferry drop off point. We strolled around the garden taking in the beautiful colours of the climbers, plants and flowers that grow here in abundance.

We noticed a couple of gardeners working away while we rambled around the gardens. They were more than happy to answer any questions we had on the type of flowers growing throughout the island. It was lovely to see such friendly people who clearly loved their jobs.

After completing the full loop of the walled gardens, we made our way back to the pier to wait for the next ferry.

True botanists and those blessed with green fingers would relish the rare and unique flora and wonderful varieties of plant life and flowers on Garinish. Even for plodding amateurs like ourselves, it was a wonderful experience. The colour and diversity on show making it such a visually appealing spectacle for us.

Garinish Island is open to the public between May and October each year. The opening times are from 10am to 4pm (3.30pm in October)

Admission to the Island was free in 2021. In previous years, Garinish Island charged a small entry fee (c. €5). A fee may be re-introduced for future years. You will definitely need to pay for the ferry crossing to get to Garinish (€14 with Harbour Queen Ferries)

Garinish has toilet facilities and a small coffee shop near the landing pier.

The Garinish Island website notes that they do not accept credit cards on the island. You will need to bring cash with you if you want to purchase anything in the café.

How long do you need to spend on the Island?

We spent 90 minutes on Garinish Island and found that this was more than enough time to fully explore the island.