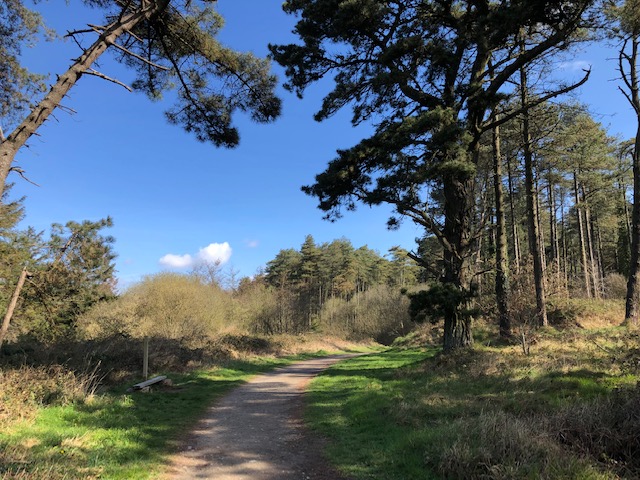 The Raven Walking Trail is pretty spectacular. The trail combines a picturesque forest walk with an amazing return along a glorious sandy beach. As such, The Raven is a stand-out walk to check out if you’re in the south east of Ireland.

The official route is called The Raven Wood Loop (also known as the Raven Point Wood Walking Trail) and is a 6.8km trail completely through the forest (details available on the Sport Ireland website).

This post however, is about a route that not only takes in the scenic forest walk but also the wonderful Curracloe beach on the return leg of the walk. Along the way you will see some great views of Wexford harbour, plenty of sand dunes, Ireland’s lowest point and hopefully some wildlife along the way! The additional beach walk adds some distance to the route but in my opinion it’s well worth it.

I have uploaded a map to alltrails.com to give you a clear idea of the route. All in all, my suggested Raven Walking Trail is 9km.

How to Get to The Raven Walking Trail

The Raven Walking Trail is served by a decent sized car park. The nearest village is Curracloe which is 2.5km away. I’ve included a google maps link to the car park. During periods of good weather the car park gets extremely busy. A lot of people use it for direct access to the beach.

We had a good crew for the Raven Walking Trail with my Wife, Mother and Sister all joining me on a sunny Sunday morning for the walk. My sister lives locally so was able to fill us in with all the local knowledge for the walk.

The first 4km or so of this walk are through the forest at the Raven Point Nature Reserve. The trail is very easy to follow; basically you keep on the path after entering the woods from the trailhead car park.

The path runs along the western perimeter of the forest. As such, the woods will be on your left hand side with a large open expanse of land visible to your right. This area is what’s known as the North Slob. The North slob is an area of mud flats at the estuary of the River Slaney as it enters the Irish Sea.

The land was reclaimed from the sea in the 1840’s as part of a famine relief project. A large portion of the North Slob is 2 metres below sea level and is the lowest point in the whole of Ireland.

The North Slob’s other claim to fame is that it is the winter home to c. 10,000 white fronted geese (about one third of the total world population). In fact, about a quarter of the North Slob incorporates the Wexford Wildfowl Reserve. Records of over 250 species of bird exist from the Wildfowl Reserve.

Following Our Own Path

Just before we reached the 3.5km mark on our walk, we noticed a sign directing us to take a left turn. This allows people to complete the Raven Wood Loop and return to the car park via the forest paths. We wanted to head to the beach so instead we continued straight ahead.

We could already see the light at the end of the forest path and made our way towards it.

Overall, the forest section of the Raven Walking Trail is very enjoyable. I found it be very calming, peaceful and lovely and cooling on a warm day.

As we came out of the woods, we took note of the sign to our right confirming the bird conservation. To our left was a path along the outside edge of the woods.

We decided to go straight and up to the water’s edge. From there, we enjoyed the nice views over to Wexford town. We then turned left after reaching the shoreline and soon encountered the path again.

The sandy path runs for about a kilometer or so alongside tidal pools and channels before sweeping to the left and onto the famous Curracloe Beach.

Just before we reached the Beach, we encountered a big Hare frolicking along the sand. While this was the only notable wildlife we saw on our walk, I am reliably informed that red squirrels can be seen sometimes in the woods. Plus, keep an eye out for seals along the beach.

Curracloe Beach is a beautiful white sandy blue flag beach that stretches out for miles. Not only is the strand known for its pristine beauty, it also is famous as where the opening scenes of the Saving Private Ryan film were shot.

I have to say I really do enjoy a beach walk. We stopped to sit on the sand and gaze out over the sea.  As a result, we took our time in completing the remainder of the Raven Walking Trail. I love that feeling of not being rushed and having the time to take everything in. Definitely one of life’s simple pleasures.

As we approached the 9km mark, we turned left and off the beach. There aren’t any signs to tell you where to leave the beach for the car park. You need to just keep an eye out for the path worn through the dunes at the back of the beach.

There usually are people coming or going between the beach and the car park so that can be a good clue too. We paused for one last look back out to see before heading back to the car.

Nearby Attractions and Areas of Interest

If you’re looking for something to eat or drink, Hotel Curracloe is probably the closest option. I have stayed in this Hotel a few times and always found them very friendly and welcoming.

I mentioned the Wexford Wildfowl Reserve above which is only a short drive away and opens to the public every day between 9a.m. and 5p.m.

One final piece of interesting information about this scenic area is that the idea for the Guinness Book of World Records was first thought up here. While staying in nearby Castlebridge House for a shooting expedition in the North Slob, the Managing Director of Guinness and some of his party became embroiled in an argument over what was the fastest game bird in Europe – the Golden Plover or the Grouse.

They couldn’t find any reference books to prove either side correct. Realising that debates such as these about records must be commonplace – the idea for the Guinness Book of World Records was born.

And because of this, we all now know that the Golden Plover is the fastest game bird in Europe.

We didn’t have such heated debates on our day out on the Raven Walking Trail. Nonetheless, I would still recommend this lovely walk to readers. My advice is to try to make a day of it. Enjoy some chill out time on the beach as well as the picturesque walking trail.

If you’re looking for more beach walk inspiration, check out my post on Day 1 of Walking the Burren Way which starts off from the beach in Lahinch.