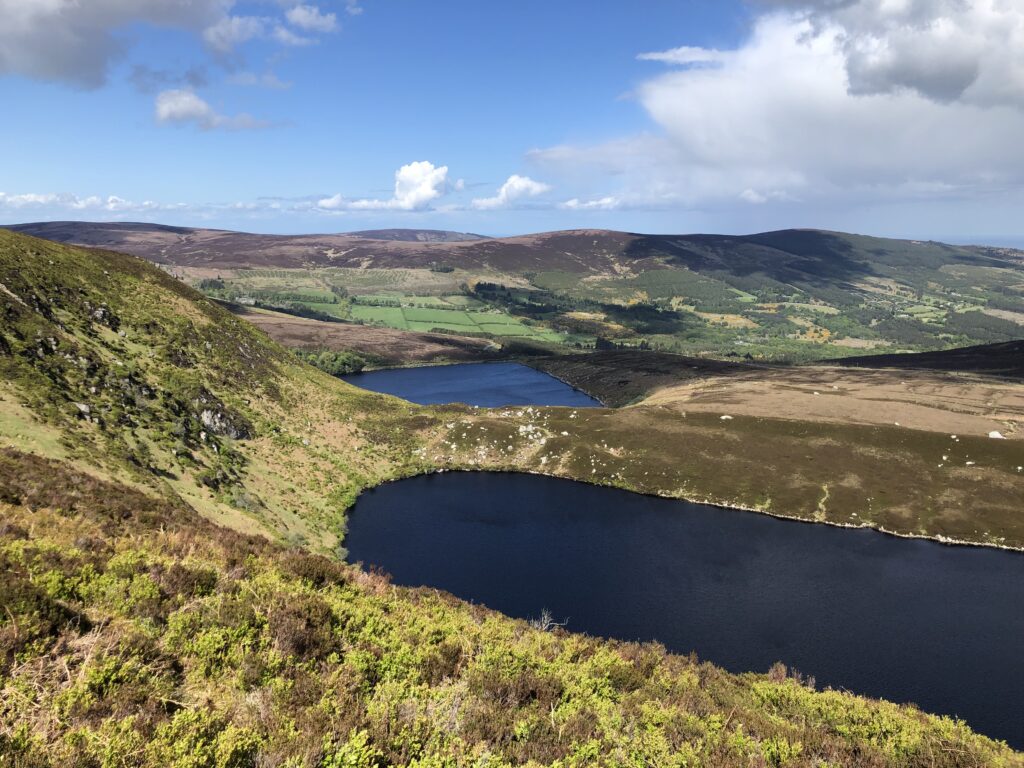 While only just under the 7km mark in distance, there is a fair bit of altitude gain along the route – about 300m or so. As such, you will need a good level of fitness to comfortably complete the Lough Bray Loop.

Getting To The Start Of The Lough Bray Loop

If you have done much driving through the Wicklow Mountains, then you will likely have caught glimpses of the two lakes while motoring along the Military Road. The lakes shimmer and enticingly come in and out of view as the road winds through the mountains.

There are parking spaces available here but a couple of words of warning about the car park. Unfortunately with not a huge amount of space the car park fills up very early, especially at weekends.

Another point to note is the risk of theft. The space is on the edge of the road in an isolated location so can be tempting for thieves. My advice is not to leave any valuables in the car when you set off on your walk.

If you want to completely remove any doubt, you can also park in the nearby Glencree Centre for Peace and Reconciliation. This charitable organisation has a cafe on site and is open from 9.30a.m. – 5.30p.m. Parking here just means about 2km extra road walking to get to the Lough Bray Loop route (and 2km extra on the way back also).

I used a really good map of this route from alltrails.com.

I decided on starting my Lough Bray Loop Walk from the roadside car park. I arrived about 2p.m. on a weekday afternoon so had no issues finding a space.

From the road, you can see one side of Lough Bray Upper. I followed the little gap in the wall beside the road and followed the well worn path downwards. I found the decline a little steep initially but not overly difficult.

After a few minutes, I needed to cross a little stream. I have had difficulties previously in crossing bodies of water while out hiking – particularly when completing a hike to Lough Ouler – this little stream posed no issues however. The stream eventually flows down into the larger Glencree River.

The path becomes less obvious in some places but overall I found it easy to follow. Essentially you are heading towards the edge of the lake. Once there, I turned right and up an embankment that runs along the side of Lough Bray Upper.

The embankment brought me along one side of the lake and then about the 1km mark, Lough Bray Lower comes into view. Luckily for me, the skies had turned blue for me at this stage.

High to my left, I can see the lofty Eagle’s Crag. My route will take me up there eventually but first I have to circle around Lough Bray Lower. As such, I head towards my right and the lower shore of the lake.

Pretty much as soon as I can see the second lake, I also get a view of Lough Bray House. This stunning house sits on the northern shore of Lough Bray Lower.

The house was built as a shooting lodge for the Powerscourt Estate in the 1800’s. The famous Guinness family also owned this amazing residence at one stage.

Today, Lough Bray house is a private residence having changed hands a few times over the last 50 years or so. The owners have the added luxury of a private man made beach on the western side of the lake – the sand hauled all the way from Brittas Bay!

The path along the lower shore is pretty easy to follow. I enjoyed the fact that it afforded me great views of the cliffs on the other side of the lake that I would shortly be traversing.

I followed the route leading me back to the Military Road. The short piece of road walking here (about 100m or so) is the only point of the Lough Bray Loop that can cause a bit of confusion. I turned left and moved up past the house along the Military Road. Soon I came across a gated lane way to my left. The gate is well signposted confirming the fact that it leads into private property. Just to the right of the gate however, there is a little path that leads uphill through the gorse. This is where I needed to go.

After reaching the first mini peak just after the 2km mark, I experienced a small section of relatively flat land. I believe this section of the route can get quite wet and mucky during winter months. I had no such issues though as I made my way towards the start of the upper ridge.

Every so often I stopped to look backwards. The stunning views out over the Wicklow Mountains towards the Irish Sea seemed to get better with every step upwards I took.

The path angles slightly away from the lake to allow for a more accessible ascent to the upper ridge. I reached the path at the top and turned left. The TV mast at the top of Kippure is a good marker here.

The cliff paths around Lough Bray Lower are stunning. The next two kilometres of the Lough Bray Loop culminating at Eagle’s Crag are the highlights of the walk for me. In saying that, the 1.5km cliff walk after Eagle’s Crag is pretty spectacular too.

The path is well worn and easy to follow. In a few places I needed to be careful of my step or make some small jumps from one rock to another. While the cliff face looks steep, I never felt overly worried about it. I was too busy taking in the amazing views on offer.

I continued along the path high over the white sandy beach below me.

At this point, it is possible to leave the path and go cross country if you wish to summit Dublin’s highest point at Kippure. This route is very boggy though and I wouldn’t recommend it. I have written previously about a better route for climbing Kippure.

The path winds around following the shape of the lake. I reached Eagle’s Crag about an hour and a half into my Lough Bray Loop walk. While this was a fairly laid back pace for completing the first 4.5km, the walk is so nice that I feel you have to give it the time it deserves.

Eagle’s Crag also gives the best opportunities to gaze enviously over at the fab Lough Bray House directly across the water.

Back to Lough Bray Upper

I continued to follow the path, this time turning right and bringing me back to Lough Bray Upper. For the first time in a while I was going downhill. Despite this the route still afforded some fantastic views!

I continued the circle around the lake and was back crossing the little stream about 20 minutes later. A different crossing point further upstream but still no issues getting over. Then a little scramble uphill to get back to the road.

The last few hundred metres before the stream were possibly where the path was least visible. However at that point, I could see back to the car park so I knew the general direction to travel. As such, it didn’t cause me any great difficulty.

In general, it takes people between 2 and 2.5 hours to complete this 6.7km hike. It is a stunning little looped walk and I would highly recommend it. As mentioned above, the route is slightly challenging but well worth a visit if you think you’re up for it.